You are Here: Home » News » Local Sport » District Championship gears up for a momentous centenary year

District Championship gears up for a momentous centenary year 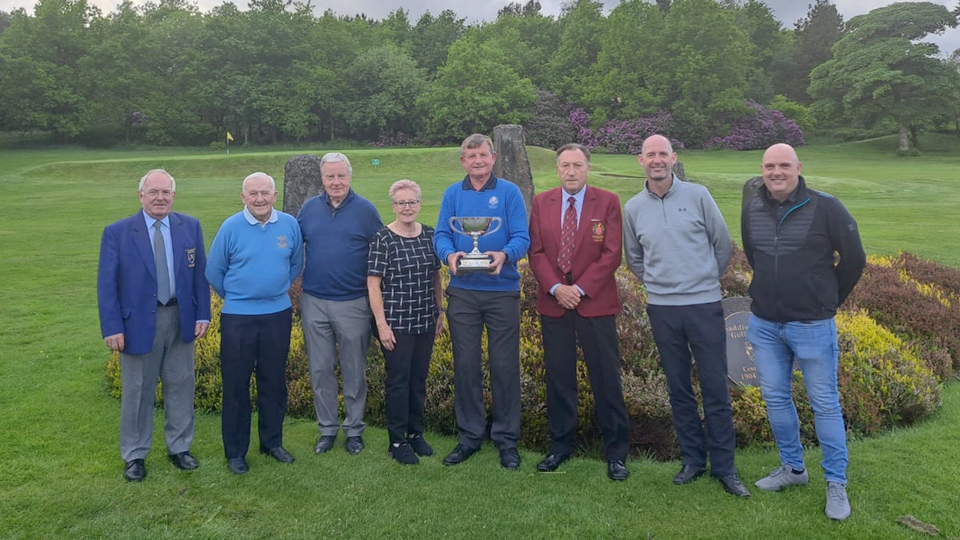 Oldham’s most prestigious golf trophy, the District Championship, celebrates its centenary year in 2022.

And to launch the opening of entries for the competition, local golf’s finest met up at Saddleworth where the event will be played on Saturday, July 2.

Five players, all of whom have won the District title on three or more occasions were in attendance.

And the quintet shared a host of memories and stories with the Captain and Lady Captain of Saddleworth Dave and Linda Newman, and the chairman of the District, John Barlow.

Local golf legend Alan Squires, who has represented both England and Lancashire with distinction in the amateur ranks, led the way with 13 titles - one short of the all-time leader, the late Harry Swailes who had 14 championships to his name.

Also at the photocall were current champion Mark Riley who has seven wins to his name, Les Lawton (4) Gary Melling (3) and Lee Rowbotham (3).

The only other player still living to have won it three times is Kris Sutcliffe, but he was away.

Stars of the evening were undoubtedly the double act of Squires and Lawton.

Lawton was in fact Squires’ mentor back in the day and he used to take a young Squires with him to compete in regular scratch competitions held all over Lancashire and beyond.

The pair of them had a fierce rivalry as well as a friendship and their names figure on the honours boards of many top clubs likes Fairhaven and Birkdale.

Squires couldn’t resist ribbing his old sparring partner about the time he rolled in a 30-footer to win a play-off for the District. Lawton scowled… then smiled.

And they were such a force in golf.

In one 16-year period, either Swailes, Squires or Lawton won the district crown with the others in hot pursuit.

Squires also remembered how he once won the Whitbread Trophy and had to get an 18-gallon keg of beer in the back of Lawton’s car.

And on another occasion he won a fireplace (no vouchers in those days) and they got it in the back with inches to spare only to rip the leather seats when they got it out at the other end.

Lawton, 86 next month, was infamous around the region for running side-bets with his fellow competitors… and he very rarely came unstuck.

Squires was only 18 when he won his first District title - a feat matched by Lee Rowbotham when he beat Andy Clarke (C&R) in a play-off at Oldham in 2013.

Rowbotham would go on to retain the title the following year and had to wait another 10 years before he robbed his younger brother Adam of a double by beating him in a play-off in 2014.

Adam, now off a plus handicap of +2.4 at Saddleworth having honed his skills at Werneth, will be one of the favourites this time around as he set the course record last year and recently finished an impressive third as an amateur guest in a Lancashire PGA event held at the Mountain Ash course.

That 18-year-old first win has been eclipsed by another three-time winner, C&R’s Gary Melling.

He now has his eyes set firmly on the 29-year record span of wins held by Squires.

But his own youngest winner record might well be under threat from his own son Daniel.

Daniel (handicap 2.6) is the current Lancashire Under-16 champion and won a nett prize at last year’s event at Brookdale.

Saddleworth this time around might be a tough ask but Daniel will still be a younger than his dad if he was to triumph at his home course C&R in 2023.

Last but not least in this parade of champions was current holder Mark Riley.

Riley has proved an amazing competitor only taking up golf after attending the 1990 Open Golf Championships.

Of his seven wins, he is most proud of a success at Werneth where he was unfancied against a strong home brigade and yet he turned in a 129 36-hole total that has never been matched in Werneth’s own club championship.

Riley spoke for all the former champions when he praised golf for forging so many friendships for him over the decades.

He also paid tribute to the Swailes-Squires-Lawton era for laying a bedrock for the competition that the current golfers have a duty to continue.

And he also pointed out how lucky he feels to have won seven times - when such great golfers as Pete Buckley (Brookdale) and Les Dooley (Werneth) have come so close on many occasions without ever getting their names on the coveted trophy.

District chairman John Barlow, said he was in awe of the golfing prowess around the table and formally opened entry to the 2022 competition, thanking Saddleworth’s dignitaries for hosting the photocall.

The five clubs in the Oldham district will have entry forms on their noticeboards.

Other clubs within the Oldham and District Golf League are eligible to enter and can send their name, handicap and current CDH number to: secretary@saddleworthgolfclub.co.uk