You are Here: Home » News » Community News » Unmissable offer for military personnel down at the Toby Carvery

Unmissable offer for military personnel down at the Toby Carvery 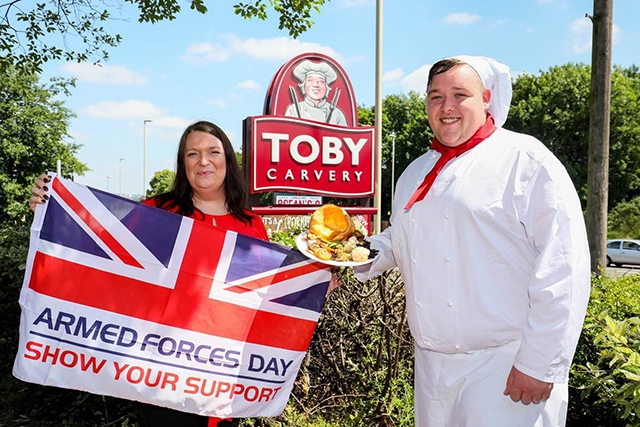 Toby Carvery is inviting military personnel to rally the troops and join them for a free breakfast or carvery meal on Saturday.

The special Armed Forces Day offer is open to all military personnel, ranging from serving troops and reserves to veterans and cadets, and is Toby’s way of thanking these heroes for everything they do.

All eligible recipients have to do is visit the Toby Carvery website and download their voucher, which they can present at their local restaurant alongside their military ID or veteran’s card to receive a free breakfast or carvery meal.

Toby Carvery’s ongoing partnership with The Royal British Legion has seen the restaurant chain continue to support the charity through fundraising initiatives, and recently added a special charity pudding to its menus, donating 25p from each Jam and Coconut Sponge sale to The Legion.

Toby Carvery has also been announced as an official partner of The Royal British Legion’s ‘Thank You’ campaign, marking 100 years since the end of the First World War by thanking those who lived through this tragic and remarkable time and played a vital role in the war effort.

Martin Gosling, Brand Operations Director for Toby Carvery, said: “This is the third year we’ve gifted free meals on Armed Forces Day, and each year we are overwhelmed by the response.

"For Toby Carvery having the opportunity to thank our heroes is so important to us.

"Our partnership with The Royal British Legion means we can continue to support the armed forces throughout the year, recognising all that they do for the country at home and abroad.”

Armed Forces Day is an annual celebration of military personnel, showing support for the brave men and women who represent the UK in the Army, Navy and Royal Air Force.

To download your Armed Forces Day voucher, book a table or find out more about the offer, visit: https://www.tobycarvery.co.uk/armed-forces

A brilliant family day out is in prospect too, at the Railway Hotel in Royton on Saturday when the Royton branch of the Royal British Legion stage an Armed Forces Day celebration.