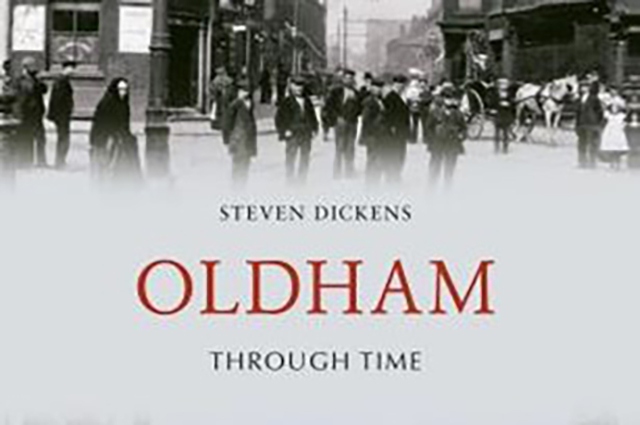 Steven Dickens traces Oldham’s development from its peak as the most productive cotton spinning mill town in the world to the modern day.

Oldham Through Time by Steven Dickens

For those nostalgic for Oldham’s past as a boomtown of the Industrial Revolution and one of the first ever industrialised towns in England, Steven Dickens’ Oldham Through Time revisits Oldham’s fascinating history in full colour through a series of images from the last 150 years.

Steven John Dickens is a retired charge nurse and college lecturer with a BA. Hons in History from Sheffield University and an MA in Twentieth Century History from Liverpool University.

His interest in local and social history has led him to write for several local history publications, including the Manchester Genealogist and The Journal of the Altrincham History Society.

In his book, Dickens traces Oldham’s development from its peak as the most productive cotton spinning mill town in the world to the modern day.

He recounts through images its transition to an industrial metropolis of textile factories in the 18th century and the subsequent mass migration of workers from outlying villages that caused Oldham’s population to increase from 12,000 in 1801 to 137,000 in 1901.

The decline of the textile industry in the mid-20th century led to the closure of the town’s last mill in 1998, before the town became a predominantly residential centre for further education and performing arts.

The 180 illustrations in Oldham Through Time show how Oldham has changed and developed over the last century and a half.

It is available in paperback, Kindle, Kobo and iBook formats and is the latest title in Amberley’s highly successful Through Time series.