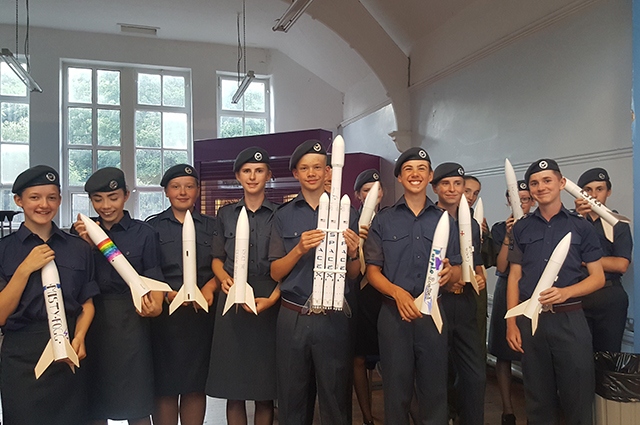 Saddleworth air cadets have touched down after a space Odyssey that has taken them from Oldham to orbit.

Over the last 12 months, the air cadets have made a number of stellar breakthroughs into the world of science.

Their adventure began with the Astro Pi competition, a collaboration between the European Space Agency and the Raspberry Pi Foundation which invited entrants to examine life on Earth through a series of pictures taken from orbit.

The young physicists designed an experiment, wrote corresponding computer code, and submitted a written report to test the link between infrared light and environmental damage on Earth.

After being judged by ESA scientists, Saddleworth's cadets became this year's winners and received a collection of pictures and videos from space to study.

It was the Astro Pi computer that provided the inspiration for their next project - one which would make it all the way to space from NASAs Pacific Marshall Island facility.

The Schools Micro Gravity Rocket Experiment invited school groups to submit a small sculpture to fly into space onboard a rocket.

In celebration of their previous success, the air cadets chose a 3D print of a micro Astro Pi computer.

The little figure flew to an altitude of 250km and at speeds of 4,500mph, returning with a video of its time in space.

It was the SpaceX Falcon Heavy Launch, the first flight of a new rocket capable of landing after launch, which then began to interest the group.

The young cadets built and flew 15 of their own rockets, including a Falcon Heavy scale model that proved the most powerful by a factor of three.

Onboard cameras got some great footage of each rocket's flight and the process proved an invaluable exercise in engineering.

The final step of the group's space adventure took them to Durham.

This was the landing site of their helium balloon that had reached an altitude of 110,000ft and travelled across 125 miles.

Through radio and GPS, the recovery team were able to track the balloon and recover it intact within an hour of landing.

Along with the footage, the team acquired a secret payload of badges sent to the edge of space for the cadets.

These efforts are hoped to equip the cadets with an interest in STEM fields, paving the way for the engineers, pilots, scientists and astronauts of the future.