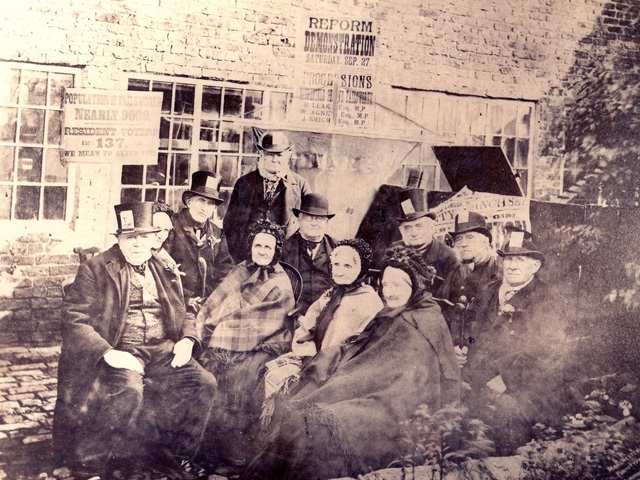 Photo: ‘Black banner’ and ‘Ridden down’ to Peterloo Graphic Novel.

Veterans of Peterloo assemble at Failsworth at 1884

Gallery Oldham’s newest exhibition, ‘From Waterloo to Peterloo’ explores the many stories linking Oldham and its people with the historic events of Peterloo.

The exhibition opens on Saturday 25 May and runs until Saturday 21 September.

This year marks the bicentenary of the Peterloo Massacre in 1819, when a peaceful political meeting in Manchester was violently broken up by the authorities, resulting in an alarming death toll.

The crowd that congregated was made up of more than 60,000 people and the Oldham contingent was said to be the largest of any group in attendance.

Several people from the Oldham area were killed at Peterloo and dozens more were injured.

John Lees, a young man from Oldham, is remembered in the exhibition as he had been a soldier at Waterloo and was killed as a result of Peterloo.

The inquest into his death took place in Oldham and is an important source of information about the events of that day. 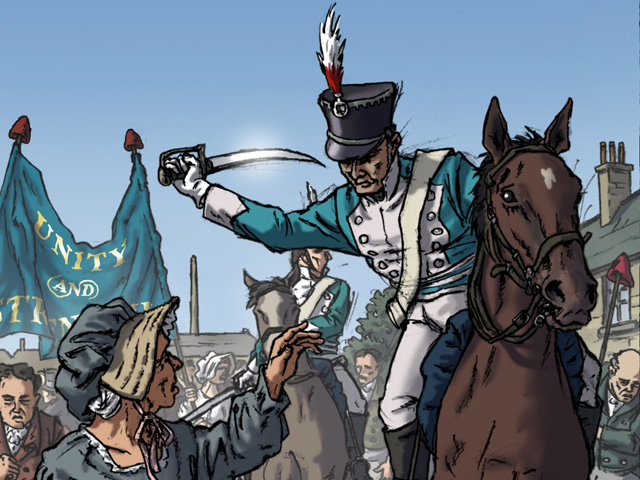 As well as examining the legacy of Peterloo and why the memory of that day has remained important in the town for many years, the exhibition also looks at what life was like in Oldham in the early 1800’s, using items from Gallery Oldham’s collections.

These will be displayed alongside several images from a newly produced graphic novel that tells the story of the day: ‘Peterloo -Witnesses to a Massacre.’

To mark that occasion, several events are being held across the borough over the coming months.

Oldham’s involvement in the Peterloo meeting was sizeable and was the largest contingent that attended. The tragedy that was to follow could not have been predicted and it is only right to acknowledge it two centuries on.”

There will be a series of activities as part of the Gallery Oldham Season Launch on 15th June, including a guided tour of the exhibition and a chance to meet the authors of the Peterloo Graphic Novel.

A series of talks and activities will also take place during the run of the show, including:

Join Dr Alison Morgan for a fascinating talk about the songs and ballads linked to Peterloo.

Help revive the Liberty Cap as a symbol of freedom and democracy by making your own cap with artists Paul Fitzgerald and Eva Schlunke.

Join the exhibition curator Sean Baggaley to explore stories of Oldhamers at Peterloo.

For more information on the exhibition and upcoming events, visit www.galleryoldham.org.uk.