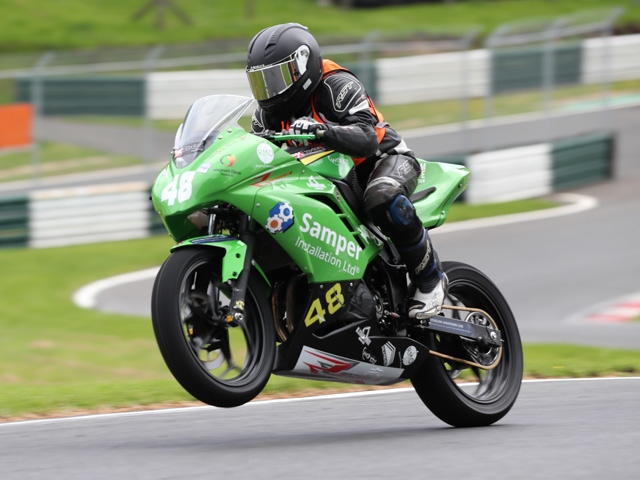 13-year old Joe Howard from Newhey, first got on the bike after losing his dad to prostate cancer in 2012, he believed this was an escape mechanism and a challenging hobby to focus his mind.

Joe said “At the time I didn’t realise that my dad had cancer because I was so young and Murphy’s North West payed for me, my dad and my mum to go to Disney land to spend extra quality time with my dad”.

I used to do motocross, but I moved to super biking and it’s a lot different because you’re riding on a tarmac track so it’s a different environment.

Brian Spreadborough (close friend of Joe’s father and owner of Murphy’s North West) and Graham Tongue took Joe under their wing and formed ‘Team 48’ that has seen Joe transition from motocross to super-biking ace.

He has now become one of the most talented riders amongst his division.

Brian and Graham along with Joe’s mother Kobi Howard, have all played their part in helping the young star in his aim to make it professional.

Joe is part of the Super teens division that consists of riders up to the age of 18 years, being just 13, he hopes to progress up the rankings and make it to his desired level, with the strong support of his friends and family.

Brian said, “The life skills he’s learning are amazing, it keeps him in check. He learns about the mechanics of the motorbike and he gets told when things aren’t perfect.

If that’s not educating a child, then I don’t know what is.”

Joe, who rides at British Championship level and already has sponsors including Robinsons of Rochdale and Samper Installations, aims to broaden his success to reach the British Talent Cup.

Brian added, “There’s a competition called the British Talent Cup and that’s where were aiming but you need to qualify for that. There’s a lot of luck involved with where you’re going to go.”