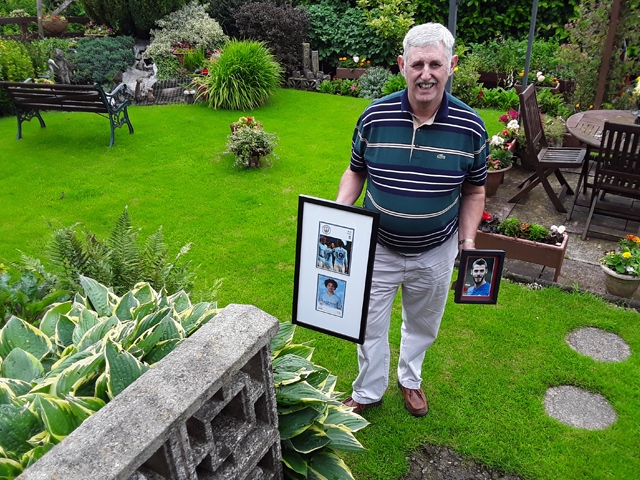 Tom Adamson in the Grasscroft garden

Football fans can scoop two great prizes at a silent auction to raise funds for a good cause as an award-winning Grasscroft garden opens once again to the public this month.

Tom Adamson and Doreen Tetlow have scooped numerous accolades over 14 years for their garden, which includes perennials shrubs, an array of flowers, begonias and bedding plants.

Their awards include honours in the Parish Council’s annual Saddleworth in Bloom Competition as well as the Oldham Council Private Garden Competition.

On Saturday 13th July, locals have another chance to admire the beautiful setting at the Open Garden event, which is in aid of Christies NHS Foundation Hospital, from 2pm-5pm at Hylands, 46 Burnedge Lane.

The event will be officially opened by the Mayor of Oldham Cllr Ginny Alexander and her consort Adrian Alexander at 2pm.

There will be tea, coffee and cake, a bric-a-brac stall, lucky dip and a raffle with all prizes donated by local and national businesses.

And a silent auction will be held to find a home for two pieces of football memorabilia, beautifully mounted and framed by Millyard Gallery in Uppermill.

One item is signed by Manchester City footballer Leroy Sane and the other by Manchester United’s David De Gea. Both items come with authenticity certificates.

Tom said, “When we decided to do a silent auction we wanted to get something really special so I got in touch with City and United and asked how they could help.

They sent this fantastic memorabilia and we hope it will help to raise some more funds for Christies.”

Tom said he has been overwhelmed by the local and national support who have been very willing to get involved.

“We hope people will come along to see the garden as we put a lot of hard work into it and we’re hoping to raise a good amount for a great cause,” he added.

Last time Tom and Doreen held an Open Garden event in 2017, around 70 guests attended and helped to raise £870.90 for the British Heart Foundation.