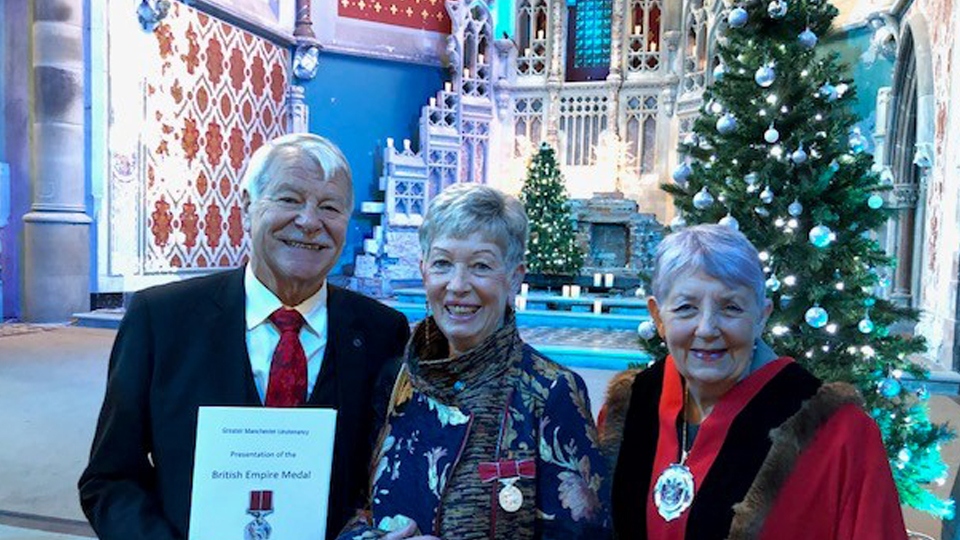 A woman recognised for putting a tiny Saddleworth hamlet back on the map has been presented with a British Empire Medal.

Jennifer Greenwood  from Lydgate was one of five recipients to receive the honour  from Warren Smith,  Lord Lieutenant of Greater Manchester,  at Gorton Monastery.

As chair and secretary of Love Lydgate, a community group,  she encouraged community pride and involvement by introducing a wide range of projects and activities.

The Lord Lieutenant said: “Today’s recipients are true representatives of those who dedicate themselves to the communities within which they work and live.”

Jennifer was joined at the ceremony by Oldham’s deputy Mayor, Cllr Jenny Harrison, and friends and  neighbours from Lydgate.

Soaking later, Jennifer said, “It was a wonderful experience, and, as there was only five award recipients, we were allowed to take more guests than usual. t was lovely to be able to take people from the village who have all contributed so much as well as my husband and son. I only wish I could have taken everyone!

“It was so nice of Cllr Harrison attend  too. We will be inviting her to the village as our special guest.  The venue itself  was amazing and a wonderful backdrop to a really exciting day.”