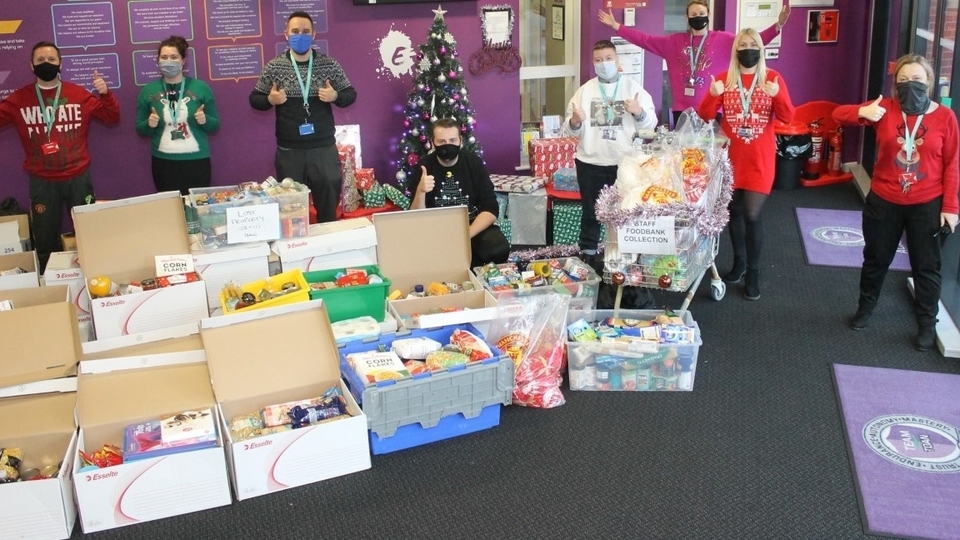 Warm-hearted Oldham Academy North students have been doing their bit for the local community in the form of launching a social enterprise initiative of collecting for a local foodbank.

Led by the student council, the Academy - one of the Manchester United Foundation’s partner schools - decided to do all they could to support local residents during these challenging times by collecting food for the Oldham Foodbank.

The student council worked hard to promote the initiative amongst students.

They made posters to be displayed around the academy and visited each form every week delivering presentations to raise awareness of the need in their area and to encourage everyone to donate as much as they could.

Setting a competition between forms for donating the most food hugely contributed to the success of the campaign.

They pitched the idea that for this year’s Christmas Jumper Day, students should bring in an item of non-perishable food rather than a monitory charity donation as they normally do, in order to help the campaign.

The Headteacher was happy to support the campaign.

Rachael Hallam said: “I am always happy to support suggestions made by our student council, but this term’s suggestion of working with the Manchester United Foundation and supporting the local foodbank was something that I am extremely passionate about.

"We wanted to make sure we had the largest collection we’d ever had and so promoted the foodbank collection at every opportunity.

"Rather than send Christmas cards, I asked staff to donate to the foodbank instead, personally donating 120 items rather than the 120 cards I would usually send to the staff.”

The whole of the TOAN community got involved in donating to those who need it, with parents regularly dropping off a large amount of donations each week.

One of the parents who works in a local supermarket regularly donated large amounts of food, some of which was donated by their customers.

The Headteacher was overwhelmed with the amount of food donated, which was gratefully received by the Oldham foodbank who collected a full van’s worth from the academy.

The student council have decided the campaign shouldn’t finish at Christmas and are already planning how they can continue to support the food bank in the new year.

The Headteacher added: “I am overwhelmed by the generosity of spirit shown by the staff, students and the community in order to support the people of Oldham and we look forward to supporting again in the future.”