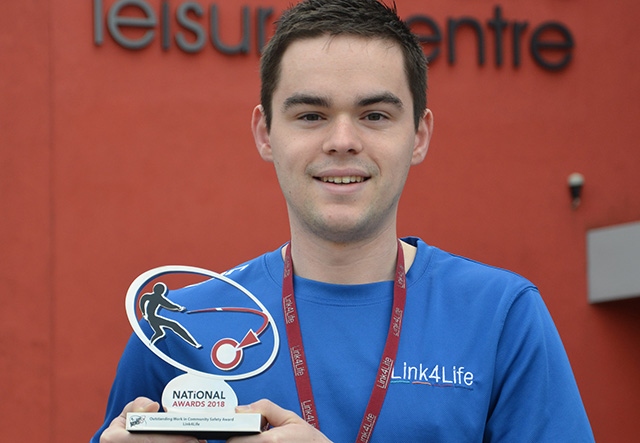 A charity sport coach has won a national award for work promoting games and employment skills, alongside tackling anti-social behaviour and money-lending in Greater Manchester.

Former Oldham Sixth Form College student Matthew Howells is a coach for charity Link4Life, which serves the borough of Rochdale including Heywood and Middleton.

Link4Life operates leisure, arts and culture venues and activities including community health and well-being programmes for all ages.

Howells has received the national Outstanding Work in Community Safety from the Street Games charity for activities at Heywood’s Darnhill estate.

He received the award at the national Street Games conference in Northamptonshire.

Howells (aged 23), from Littleborough, is a big Rochdale FC supporter and former Hollingworth High School student. He joined Link4Life after graduating from the University of Central Lancashire.

With Link4Life he has been running sports activities for youngsters in Heywood during the evening for over two years.

Street games include tennis, football and golf with soft balls, while other work addresses anti-social behaviour.

Howells said: “I’m delighted to win this award which recognises all the hard work we’re doing at  Link4Life.

"I’ll be taking this award to Darnhill because it’s the people living there who have really made this programme a success.”

The Darnhill scheme was originally one of seven Home Office and Police and Crime Commissioner projects chosen to establish effective ways to use the power of sport to reduce youth crime.

The main goal is to achieve a reduction in anti-social behaviour. Darnhill was chosen after consultation with former Heywood and Middleton police Inspector Steve Hanlon and the community.

Darnhill’s boxing club was burned down a few years ago and it has no indoor venues for children and young people, other than a library.

There had also been friction between some local shop keepers, residents and youngsters who were hanging around at night.

Howells and the youth service put on activities on a kick-pitch behind the shops. The first challenge was to fix some of the broken lights above the pitch. Then he put on tennis, football and street golf with soft balls.

At first there were some raised eyebrows from shopkeepers when they saw youngsters carrying golf clubs and wearing 'balaclavas'.

In fact, the balaclavas were snoods to keep the youngsters warm and the golf clubs were being used for an adapted game of golf.

Link4Life have also trained residents as community sports coaches so they can volunteer and get paid to deliver on projects in the areas they live.

Some of the young people who were causing a nuisance have completed training and are now good examples of how sport and having the right opportunities can change people’s lives and skills and deter youngsters from crime.

Newly-trained community sports leaders from the Skills4Sports course can spot and help hard-up families who may become victims. And money recovered from loan sharks has been invested in community projects.

Howells was one of three Link4Life coaches who were national finalists at the Street Games Awards.

Scott Hardy was a finalist in the Project of the Year category for a programme called Fit, Fed and Read.

Aleksandra Savina was a Coach of the Year finalist for a dance-fitness programme called Rochdale Us Girls.