You are Here: Home » News » Lifestyle: Music  » Thriving city music scene set for a further shot in the arm 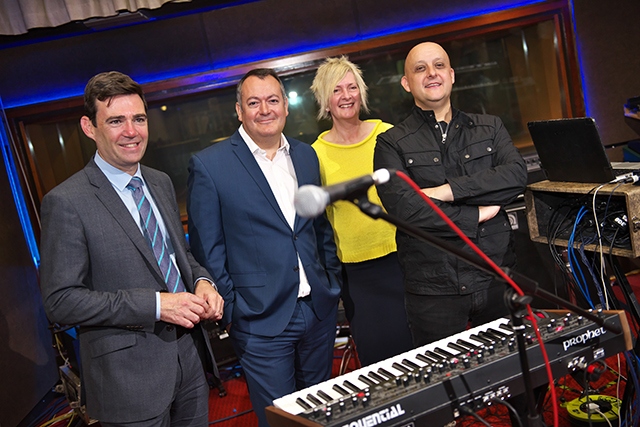 Radical new plans to strengthen Greater Manchester’s music scene, from established artists to up-and-coming musicians of all genres, have been revealed.

Working alongside UK Music and a panel of experts, Mayor of Greater Manchester Andy Burnham has set up a major review to see how the city-region’s thriving scene can be nurtured, encouraged and refreshed.

Over the next six months, voices from across the music industry will be asked share their views and experiences of Greater Manchester’s music culture as part of these exciting plans, which were unveiled at Low Four Studios part of Old Granada Studios - Allied London’s new St John’s development.

The review will look into Greater Manchester’s musical strengths, as well as where the music scene can be improved, ensuring that artists are supported to develop sustainable careers where everyone can access music in a safe and inclusive way.

Building on Greater Manchester’s incredible music heritage, the review will support bands of all cultures and backgrounds including our well-defined indie legacy to music of black origin, brass bands and orchestras.

Mr Burnham said: “Greater Manchester has led the way when it comes to British music, producing some of the greatest bands this country has ever known from Oasis to the Stone Roses, as well as being home to internationally-renowned orchestras.

“The music greats of our past inspire young musicians of today.

"We must build on this, beyond the already well-defined indie legacy, to truly embed culture and the arts in the heart of our communities and give future generations the opportunities to fulfil their creative potential.

“This review will enable us to support artists, businesses and audiences of all genres so that they are able to get more out of creating the music they love.”

The 2017 Measuring Music report revealed that the music industry generated £4.4 billion to the UK economy.

The review of the city-region will reveal, for the first time, the value of music to Greater Manchester.

"Andy Burnham gets how important this is and is passionate about supporting the city-region’s amazing talent and great venues.

"Like UK Music, he wants to look at ways to nurture all the different elements that make up the music industry’s eco-system and to see how we can help it thrive in the future.”

An advisory panel will be set up in the coming weeks with representatives from across Greater Manchester’s diverse music scene.

This ought to be music to the ears of a number of exciting up-and-coming bands and musicians from in and around the Oldham area, many of whom head into Manchester city centre on a regular basis to play packed-out gigs.

Highly-rated Saddleworth outfit Gardenback headline Manchester's Soup Kitchen on Saturday, June 30, in what will be their biggest and hopefully most successful show yet.