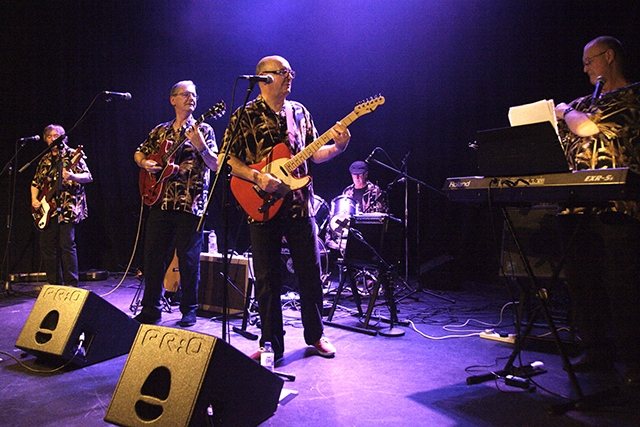 Mid-Life Crisis strutting their stuff at the Playhouse 2. Photograph courtesy of Pete Grubb

Mid-Life Crisis were back at Playhouse 2 in Shaw once again on Saturday for another sell-out night of pop and rock music, featuring hits from the 1950s to the 2000s.

The five-strong group give their services free of charge to charities or even private parties, but the proviso is that a donation would be made to a charity of the group’s choice.

After starting as a duo in 2001 with guitarists Bernie Allen and Alan Humphries, the band quickly swelled to the five-piece outfit that now features Phil Horrocks on keyboards, Mike Turner on bass and Howard Lees on drums.

Among their most successful performances are the previous shows the band have played at the Playhouse 2, where the band have posted the ‘sold out’ signs on four occasions since their first show at the venue in 2009.

'MLC', as they are often called, play familiar tunes from the 1950s right up to the present time and so far over £45,000 has been raised for good causes, mostly centred in and around the Oldham area, but also for some well-known national charities including Clic Sargent, The Children’s Sunflower Trust and Christies.

The charities that will benefit from this year’s Playhouse 2 show are the Victoria Breast Care Unit at the Royal Oldham Hospital and Chadderton and Oldham Cancer Research.

The proceeds from the gig will see each of these two worthy causes receiving over £500.