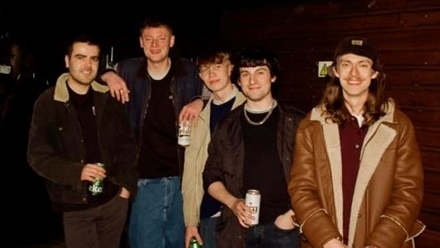 Oldham's own Madame Claude have released their second single ‘Minding My Own’.

The five piece play energetic and rhythmic ska music, and already garnering a reputation for their immensely fun live performances.

‘We’ve been playing together for around a year now’ says Micky from the band. ‘It started out with myself, Charlie and Frank playing about at a studio in Saddleworth’

‘After we started sounding alright, we started looking into getting a drummer, and Gabe from Saddleworth joined and we started writing our own tunes and taking it a bit more seriously.

‘Henry came in a couple of months later and that completed the picture for us. By this point most of us were living together, so we could practice more’.

While the group's members, (Micky, Charlie, Frank, Gabe & Henry) are all into different music they all draw on old ska and reggae music, citing Alton Ellis, Cornell Campbell and Phyllis Dillon as influences.

Interestingly, despite the upbeat ska feel to their sound, the inspiration for the new single ‘Minding My Own’ actually came from ‘Cool Cats’ by Queen.

‘None of us regularly listen to Queen’ says Micky ‘but that tune is gorgeous- we wanted to get a bit of that muted melodic guitar into something’. They combine that influence with a Northern Soul bass line that drives the song along, and with day dreamy lyrics about ‘sitting somewhere nice, watching the world far away from whatever it is that’s winding you up that day’.

‘Minding My Own’ follows their first single ‘Threw It Away’ which was released earlier this year and the band plan on releasing more very soon. "We’ve just started recording another few tunes which we’re really enjoying. They should be ready at some point this year so there’s plenty more stuff to come."

"We’ve got plenty more gigs lined up too. They’re mostly around the Manchester area but we’re starting to get out further afield now!"

Madame Claude will certainly be one to keep an eye on this year, and to keep up to date with their latest releases and gigs follow them on Facebook at https://www.facebook.com/MadameClaudeMusic or on Instagram @madameclaude.official