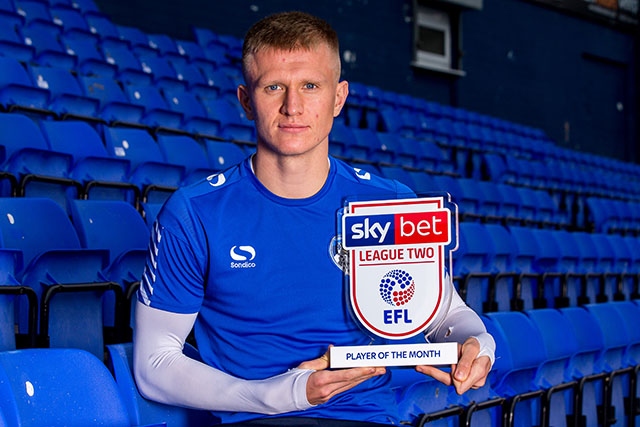 Sam Surridge shows off his award

Athletic striker Sam Surridge has been named the Sky Bet League Two Player of the Month for September.

A strong runner who loves to take on defenders, Surridge’s power in the air brought two headed goals, including a stooping effort inches off the ground against Crawley Town.

Athletic boss Frankie Bunn said: “His record speaks for itself, hopefully there’s a lot more to come from him.

“He has been in a side that has created the chances for him but he has put them away so he will get the credit for that.

“He is still a young player, he is still developing, he is still growing and as it stands at the minute the future looks bright for him and long may that continue.”

Surridge said: “I’m happy to get the award and to have scored a few goals in September.

“I want to thank the manager and the other players who have helped me, without them this wouldn’t have happened.

“Hopefully I can continue to keep scoring as well as helping the team pick up points.”

Sky Sports’ EFL pundit Don Goodman said: “For a young player at a Premier League club like Surridge at Bournemouth, dropping down the leagues is a chance to show his parent club what he can do in a competitive environment with the games coming thick and fast.

“He had a successful spell at Yeovil Town last season, scoring 10 goals in 53 appearances, but has moved on a level with a full pre-season on the south coast and now five goals in four September appearances for Oldham.”