You are Here: Home » News » Latics » 'Think about yourselves', Bunn urges players

'Think about yourselves', Bunn urges players 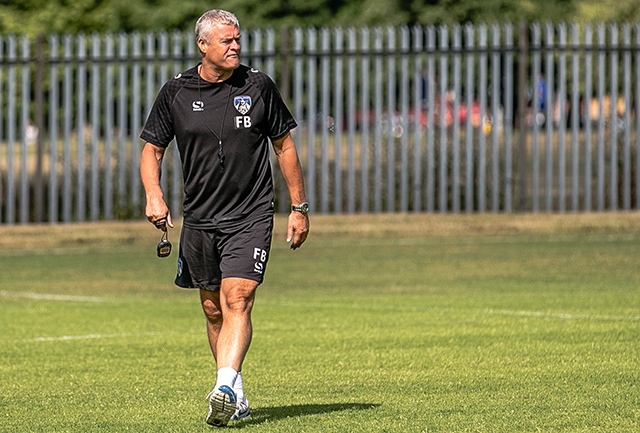 Athletic boss Frankie Bunn has urged his players to blank out the doubters as his side look to dump tiny Hampton and Richmond Borough out of the FA Cup at the Jezzards Beveree Stadium tonight (7.45pm kick-off).

The BT Sport cameras will beam the first round tie live to the nation, with many punters no doubt hungry for an upset.

Athletic’s test against a side who are currently struggling in 16th place in the National League South will still provide a stern test of character, and Bunn’s squad need to be well prepared.

“It's up to the players to blank everything out and think about themselves and the team,” said Bunn.

“It's one you've got to be mentally tough with.

“Whenever you go to teams below you in the leagues, it's about the mental approach that the players must be aware of.

“We all know why the cameras are there, they're not there to watch Oldham specifically, they're there for an upset, so hopefully we can negate that and come through with a positive result.”

Bunn admits he knew little about Hampton and Richmond when the draw was made, but he says that the team is excited for the challenge that lies ahead.

The Athletic boss added: “They had a good start to the season, but they've just faltered a little bit recently over the last two weeks, so they've dropped down the table.

“Oxford City beat them 4-2, but they knocked Eastleigh out in the fourth qualifying round to get this far.

“We've asked teams that they have played previously for some footage and we've got some footage ourselves, so we'll approach it like any other game.”

The FA Cup second round draw will take place before Athletic’s match tonight.

The draw will be shown live from the Beveree stadium on BBC 2, from 7pm.

Athletic and Hampton and Richmond Borough have been given ball number 4.

ATHLETIC youth team midfielder Harry Robinson has been called up by his national side.

The 18-year-old will join up with the Northern Ireland Under-19 squad for three U19 Euros qualifying matches later this month.

Northern Ireland is hosting a mini tournament from November 14 to 20 as part of the first stage of qualification for next year’s UEFA U19 European Championship finals in Armenia.

Robinson and his team will face Poland, Serbia and Kazakhstan.

Athletic’s Interim Academy Manager, Peter Wild, said: “It’s fantastic news for Harry, it is something that as a club and an academy we are really proud of.

“He will go there in really good form, he had a tough first year with the youth team through injury but now he’s really found the form that we saw when we first spotted him.

“Unfortunately for him, he will miss the Youth Cup second round match and our trip to Rotherham but it will be a good opportunity for someone else and it is up to them to take that chance.”