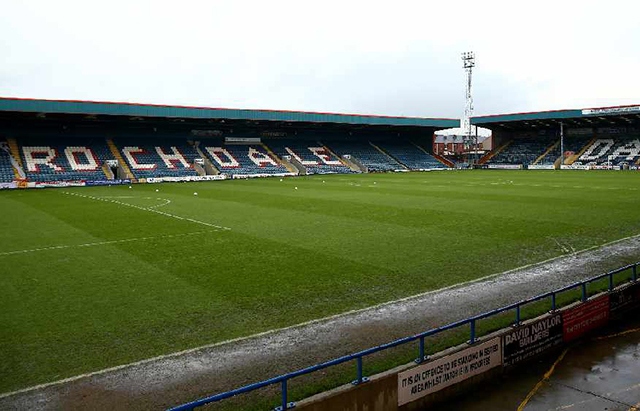 Athletic were defeated at the Crown Oil Arena last night

Athletic’s Checkatrade Trophy bid is over for another season.

The hosts left it late to secure their passage, with Joe Rafferty and Daniel Adshead scoring in stoppage-time at the end.

Athletic created the first real chance of the game as Gevaro Nepomuceno crossed from the left, but goalkeeper Magnus Norman punched away with Callum Lang waiting to tap home.

The loose ball flew straight to Cameron Dummigan, who struck a left-footed volley at a grateful Norman.

Rochdale created the best chance of the half as Gillam’s shot was blocked by Peter Clarke and George Edmundson.

The second half completely changed the face of the game as Maouche saw red following a challenge on Gillam.

Jordan Lyden then cleared Ryan Delaney’s header off the line, while Athletic ‘keeper Daniel Iversen had to be at his very best as he clawed away an Olly Rathbone effort.

As the game entered stoppage-time, Lyden was adjudged to have handled in the area, with Rafferty stepping up to score from the spot.

Adshead then ran through and slotted past Iversen for the second.

Athletic will look to bounce back when Bury visit Boundary Park for a crunch League Two derby clash this Saturday.