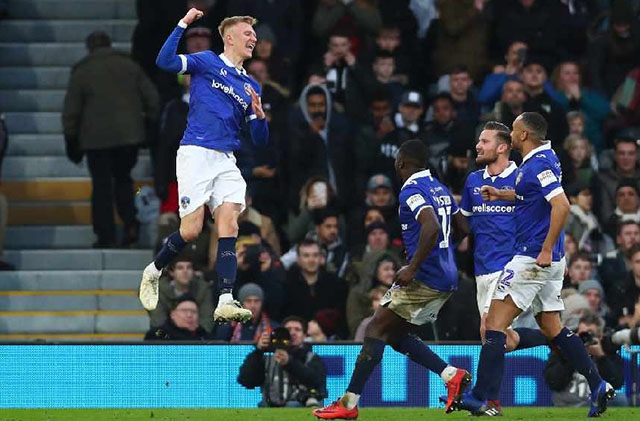 Sam Surridge celebrates his goal in style at Fulham

Super Athletic have hogged many of the national headlines this morning following their dream FA Cup victory at Premier League Fulham yesterday.

Caretaker boss and Athletic fanatic Pete Wild remains unbeaten at the helm following the 2-1 win at Craven Cottage as goals from Sam Surridge and Callum Lang saw the visitors – roared on by a 4,000-strong travelling army of fans - come from behind to claim a famous win.

The win moves Athletic into the fourth-round draw of the competition for the first time since 2013.

It was looking like the upset that everyone had gone to see wasn’t going to happen when Denis Odoi gave Claudio Ranieri’s team a 52nd-minute lead.

That followed a first half which won’t live long in the memory, but the second 45 minutes more than made up for it.

After going a goal down, it could have been easy for Athletic to crumble, but this side appear to be made of tougher stuff and they got their rewards with 14 minutes left of the game from the penalty spot.

Peter Clarke was bundled over in the area, right under the nose of the referee, who wasted no time in pointing to the spot.

It left Sam Surridge with the honour of converting the spot-kick, which he did with ease to give Athletic hope of an upset.

Those hopes appeared to have been dashed though as Fulham were award a penalty of their own with manager Ranieri bringing on striker Alexandr Mitrovic, with his first touch being to convert the spot-kick. 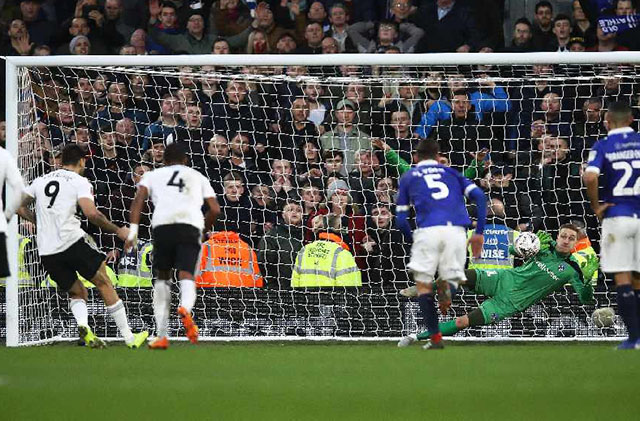 But visiting goalkeeper Daniel Iversen had over ideas and guessed correct to turn away the penalty (above), much to the joy of the Athletic fans behind him.

That set the stage for the grandstand finish provided by Callum Lang.

After Gevaro Nepomuceno delivered a delicious cross to the back post, Lang jumped higher than anyone else to send the ball back across goal and into the net.

Cue crazy scenes on the pitch as the players celebrated the goal, on the touchline with Athletic fans and caretaker boss Wild jumping up and down for joy and in the stand with the travelling army going crazy.

They had to wait almost another ten minutes before the referee finally blew the final whistle to see Athletic into the hat for the fourth round of the FA Cup and their Premier League hosts scratching their heads at what went wrong.

Athletic will be ball number 17 for the fourth-round draw which takes place tonight (Monday). 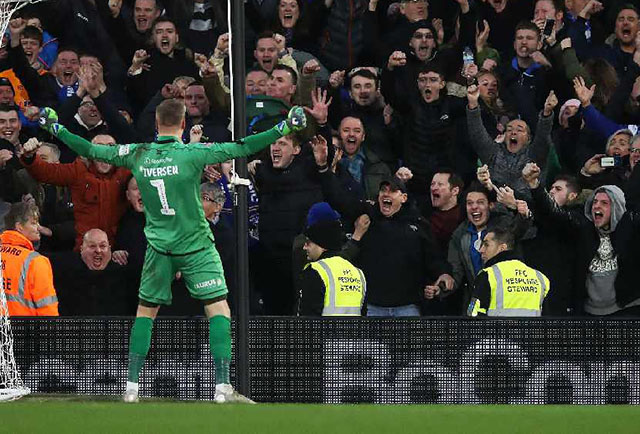 Wild, whose heroics earned him a place on the BBC’s Match of the Day 2 sofa last night, said: “It is Roy of the Rovers stuff.

“It is one you have to savour.

"We always said the longer you stay in the game, we would have a chance.

“We rode our luck at times, in the end we managed to get the result we wanted, credit to the players and the effort they put in.

"The character in the dressing room is phenomenal.

“We have a mixture of French and English lads who have bonded together.

"At 1-1 I thought let's just contain them, keep it at 1-1 but knowing we would get one more chance.

“I watched every second [of injury time] on my watch."