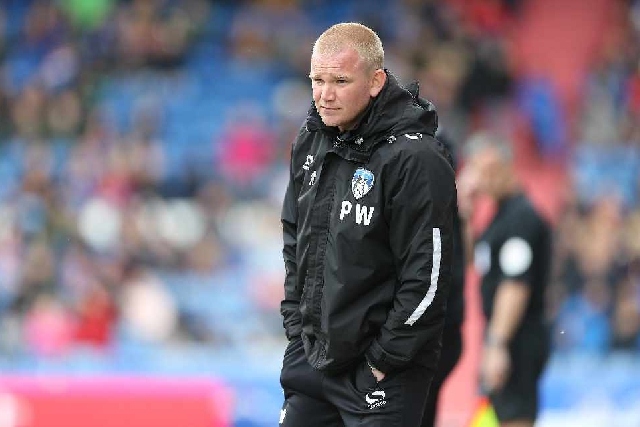 Pete Wild during the 5-2 defeat to Northampton Town

The Oldham Evening Chronicle understands Oldham Athletic’s head coach has turned down the chance to extend his stay at the helm of the club.

Pete Wild, who was in caretaker charge of the club following the sacking of Frankie Bunn, took over back in March after Paul Scholes walked out of the football club 31 days after being announced as the new manager.

Since then the Royton native guided his boyhood club to the brink of the League Two playoff places, missing out after a 1-0 defeat at Exeter City in the final weeks of the season.

He also masterminded their remarkable run to the fourth round of the FA Cup, including beating Premier League Fulham 2-1 at Craven Cottage, before they were knocked out by Doncaster Rovers.

It was thought he would be offered the job for next season as well and The Oldham Evening Chronicle understands the role was offered to him after the 5-2 defeat at home to Northampton Town which brought the curtain down on Oldham’s season.

However, the 34-year old, who started the campaign as the club’s academy manager, has turned down the offer and will now let his contract run out in the summer.

It means, once again, Oldham Athletic are on the hunt for yet another manager, their fourth full-time gaffa this season and fifth since owner Abdallah Lemsagam bought the club back in January 2018.