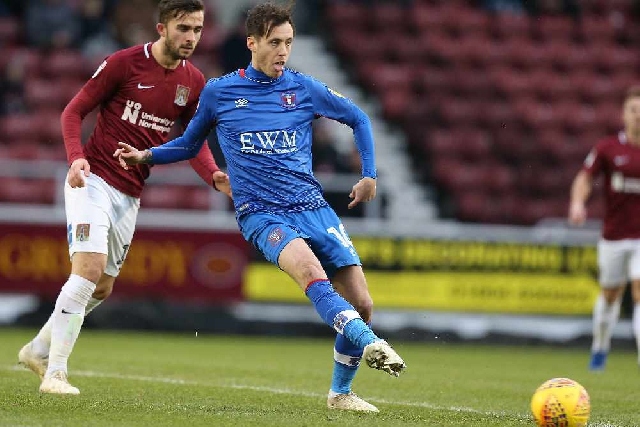 With all the talk of people departing Oldham Athletic just weeks after the season ended, there’s been very little speculation about who might be moving in the other direction and actually coming into the club.

That is until now, as reports are suggesting Latics are keeping a keen eye on Carlisle United winger Jamie Devitt, but they’re not the only ones with a former Oldham manager also said to be keen on him.

Devitt is out of contract at Brunton Park, however the Cumbrians have offered him a new deal in the hope of keeping him in their ranks.

Oldham Athletic, along with Swindon Town and Hibernian are thought to be tracking the situation with them ready to pounce if terms cannot be agreed.

The 28-year old, who scored 11 goals last season and collected eight assists, arrived in the North East after a spell at Morecambe where he made 98 appearances, scoring 12 times.

Carlisle United manager, Steven Pressley, has made no secret of his desire to keep Devitt at the club, speaking to the News and Star, he said: “He’s another who I had a good conversation with. It’s a situation in his career where he has a big decision to make.”

“He’s at a stage where this is probably the most important contract he’ll sign.”

“He’s at that sort of age, and he’s had a terrific season, so he will obviously have suitors from elsewhere. He now has to weigh up what the best option for him is and I think we can only respect that.”

“We, obviously, would love him to stay because he’s been a terrific player for the club. I have a very good relationship with him, but only time will tell now.”