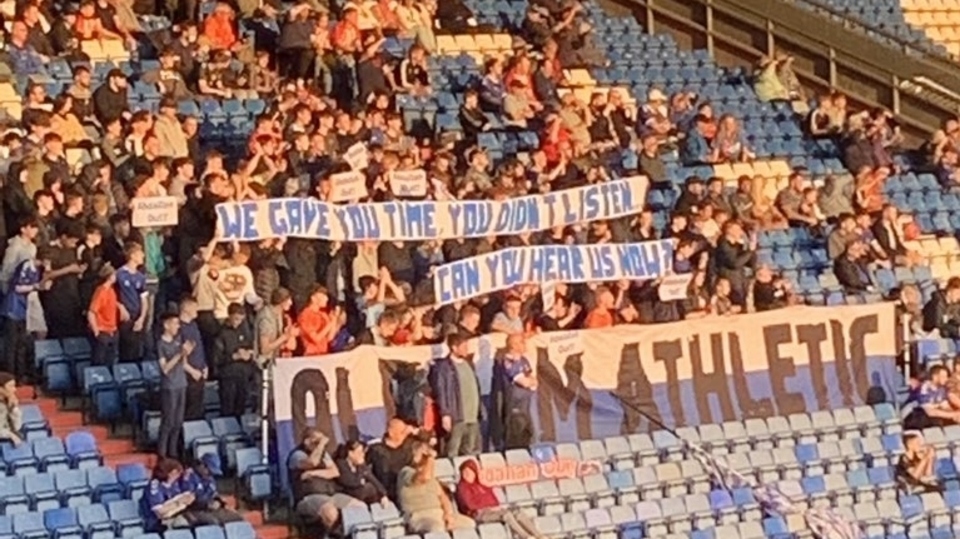 Latics made it through to the third round of the Carabao Cup last night (Tuesday) thanks to a 5-4 penalty shoot-out victory against League One Accrington.

However, the game was marred by fan protests again as tennis balls were hurled onto the pitch in the fourth minute of the second round clash at Boundary Park.

Fans protesting at the club's ownership then ran onto the pitch after the spot-kicks win, just as they had done after the weekend league defeat by Colchester.

Latics boss Keith Curle said: “We’d had some intelligence that there was going to be a demonstration of sorts, but I just said to the lads that we just needed to focus on what we needed to do.

“The supporters do what they do, but we’re here to play the game.

“You acknowledge it, but it doesn’t change our mindset.

“I don’t want to get embroiled in any of the arguments - this was a performance we need to build on.

“Sometimes out of adversity that can be the starting point in the changing room.

“There’s bits and pieces we can improve on, but the commitment is clearly there and we showed good character.

“You never know where a penalty shoot-out win can lead us.”

Latics made it through to tonight's Carabao Cup third round draw after goalkeeper Laurie Walker saved two penalties in the shoot-out after the tie ended goalless after 90 minutes.

David Morgan then let fly from 25 yards, but again Walker was equal to the task.

In the 25th minute Oldham ought to have struck when Hallam Hope fired straight at ‘keeper Toby Savin following an error by Stanley skipper Ross Sykes.

After the restart Hope wasted another great chance when he scooped over the top after meeting Dylan Bahamboula’s precise pass.

Stanley boss John Coleman was aggrieved after Latics' final spot-kick from Junior Luamba was re-taken after keeper Toby Savin was ruled to have moved off his line.

Luamba missed his initial penalty, but converted the retaken one.

Coleman said: “Fair play to Oldham, they took some good penalties, but these situations are a lottery.

“If Toby has come off his line for their last penalty then fair play, but you just never see that.

“It’s the first time I’ve ever seen that decision.

“The referee said Toby was two yards off his line, but it’s pointless blaming anybody but ourselves.

“Our performance was way below par – you wouldn’t have known that we were fourth in League One and they were bottom of League Two.

“The lads who came in just didn’t grab the shirt, though.

“And our lack of fitness was very evident.

“We’re six games into the season and players were going down like ninepins near the end.”

Latics are next in action on Saturday when they travel to League Two new boys Sutton United.