Roughyeds get into the Christmas spirit at the Royal Oldham 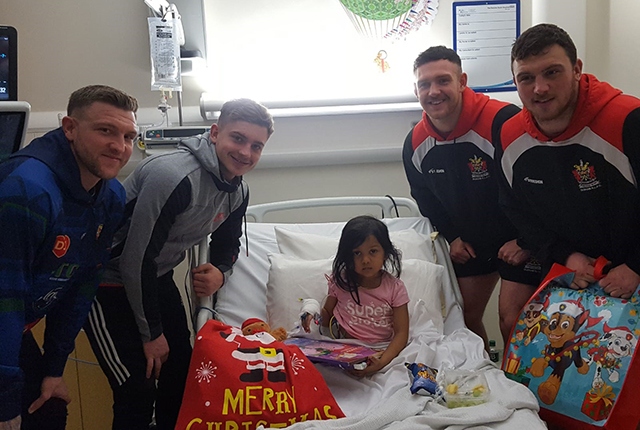 Headed by new signing Richie Hawkyard, who is enjoying a ten-year testimonial sanctioned by the Rugby Football League, Oldham RL players entered into the Christmas spirit by visiting the children's ward at the Royal Oldham Hospital to hand out chocolate selection boxes.

Pictured above (left to right) are full-back Hawkyard, hooker Jamie Greenwood, centre Zack McComb and prop Luke Nelmes -- four Yorkshiremen who found time to devote to sick children before heading off to evening pre-season training at the Vestacare Stadium.

Club mascot Roary would have been with them, but he's currently out of the country on holiday.

Richie, a nephew of former Watersheddings favourite Colin Hawkyard, has turned the testimonial principle on its head by dipping into his fund to become Santa to boys and girls on children's wards in Oldham, Halifax and Huddersfield.

Together with his five-year-old daughter Lola, he has also handed out selection boxes to children in Huddersfield's Forget Me Not hospice which supports children with life-shortening conditions and their families.

He said: "It's a real privilege to visit children who are in hospital over Christmas and to see how much they enjoy our visit."

Meanwhile, Oldham RL Club has added to the club's volunteer managerial team with the appointment of Ben Whisker (37) as business development manager.

He works full time on recruitment in the IT industry, but as a rugby league fan, a former amateur player in York, a qualified level 1 coach and with a dog he's called Ellery (after you know who), he's steeped in the sport and delighted to give up much of his spare time to work for the Vestacare Stadium club.

Ben will work closely with Julie with the specific role of leading the initiative to forge closer links with local community clubs, the community generally and with Oldham Athletic, his overall purpose being to develop the Roughyeds' business.