You are Here: Home » News » Roughyeds » Gwaze back and out to impress

Gwaze back and out to impress 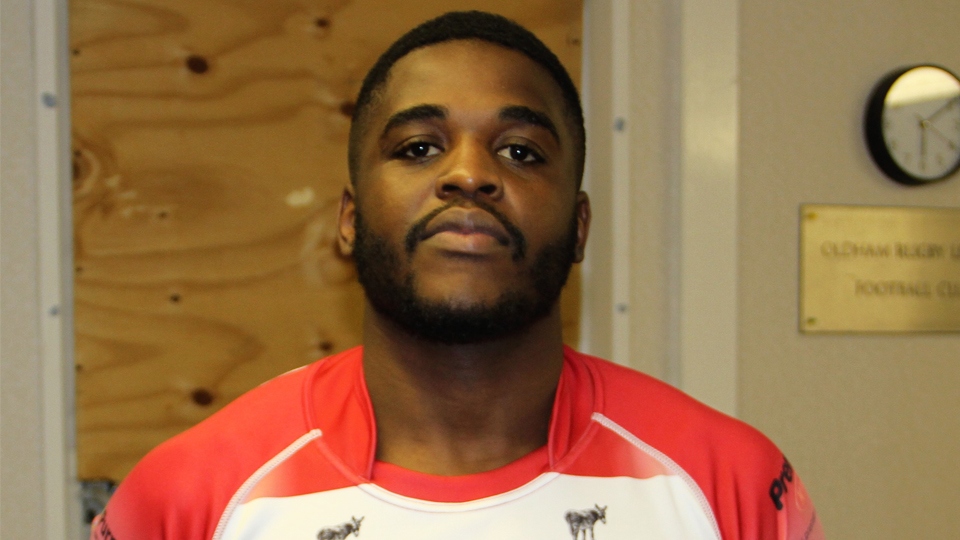 Titus Gwaze, the young prop from Wakefield Trinity who had a spell on loan with Oldham last season, is back with Roughyeds on another temporary arrangement, this time for one month.

Titus, aged 20, trained at the Vestacare Stadium on Tuesday night and will be in contention to make his second Oldham debut against Toulouse Olympique on Saturday night at the Stade Ernest Wallon, home of the French city's rugby union club.

Kick-off in the south of France is 6pm local time, 5pm UK time.

The young forward, who came from Zimbabwe and settled in Huddersfield when he was a small boy, played 14 times for Oldham in the early part of last season's Betfred League 1 promotion campaign, 11 of those appearances off the bench.

He was ultimately recalled by Trinity, for whom he made his Super League debut off the bench against Warrington Wolves last June, sharing sub duties with Kyle Wood, Craig Kopczak and Keegan Hirst.

He played in four Super League games last season - two against Warrington and also against Huddersfield Giants at home and Catalans Dragons away -- and he has since played in three pre-season friendlies recently against Leeds Rhinos, Hull FC and Huddersfield.

Titus said: "They were three tough games, but I felt good and I thought I went okay.

"I need more first-team rugby at a good level and that's why coming to Oldham on loan suits me and suits Wakefield. I loved it at Oldham last year and it should be even better this time in the Championship.

"I'm reallly looking forward to having a crack at Championship rugby with Oldham where I know a lot of the boys from last year."

In the crowd when Gwaze played for Trinity against Leeds in the annual pre-season game was Oldham boss Diskin, who was hugely impressed by the youngster's contribution.

He said: "We've been trying for a couple of months or so to get Titus back here and, having watched him against Leeds, I can say that for a 20-year-old playing in the front-row he's both explosive and dynamic.

"We've been working on this for a while and to finally get it over the line is very exciting."

Gwaze will be in the mix to go with the squad to the south of France, flying on Friday, possibly taking the place of  another young on-loan front-rower, Jimmy Beckett, who can't travel because he's on-call over the weekend at his day job.

When Diskin can name a full-strength squad he could have five 20-year-olds on duty - Beckett, Gwaze, Matthew Fletcher, John Hutchings and centre James Worthington.

Titus first came to the attention of Trinity scouts two years ago when he was playing for the Halifax Elite Rugby Academy.

He also had a spell with Keighley and the Halifax youth squad before joining Wakefield's Academy where he continued to impress and move up the ladder.

He signed a full-time Wakefield contract in May, 2018 and then made his Super League debut last summer after his 14 League 1 appearances for Oldham earlier that season.

There was more good news for Diskin at training last night when x-ray results revealed that Danny Bridge's dislocated thumb and James Worthington's sore jaw were not broken.

Both will be assessed later in the week, along with Hutchings, who has been having treatment and rehab since he tweaked a hamstring at Rochdale last month.

Diskin is keeping fingers crossed that Lewis Charnock might  also make it despite hobbling off in the second half against Widnes with a painful knee. However, the injury isn't believed to be as serious as first thought.

Diskin said: "It's more like a dead-leg close to the knee, so he could be okay,."

If all four come through that will leave a casualty list of four - prop Jode Sheriffe, who is waiting for a knee operation, Ben Davies (back), Ed Smith, who could be out for four to six weeks with a knee problem and Cam Leeming, who's broken a bone in a hand after an accident at work.