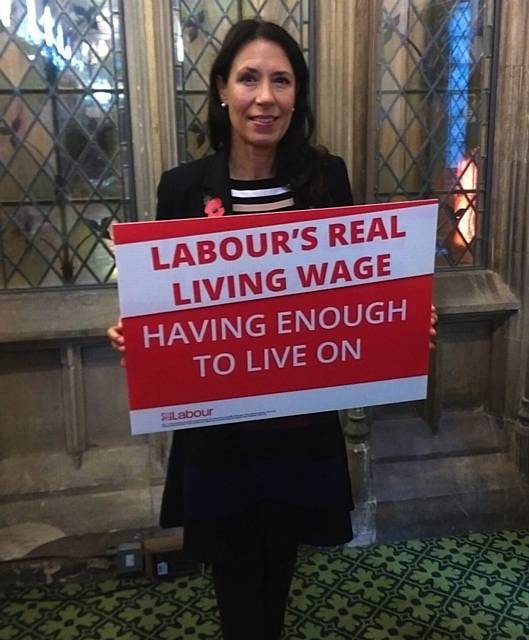 Labour's Mrs Abrahams, who is also shadow work and pensions secretary, is one of many people aiming to raise awareness of the need for a real living wage that meets the cost of living.

Living Wage Week also celebrates those employers who already signed up to the scheme and ensure that their employees receive the living wage.

The government's national living wage was introduced on April 1, for all working people aged 25 and over, and is set at £7.20 per hour.

The current national minimum wage for those under the age of 25 still applies.

Prior to former Chancellor George Osbourne's announcement of the national living wage, the term living wage was reserved for a recommended figure, set by the Resolution Foundation, which was voluntary for employers to pay.

However, the government has recently taken to re-branding the national minimum wage as the national living wage.

The London living wage is part of the recommended, or voluntary, living wage. In London this stands at £9.75 an hour, and in the rest of the country it is £8.45.

Mrs Abrahams said: "This is a great opportunity to raise awareness of the need for a real living wage that meets the cost of living and to celebrate responsible employers that commit to ensuring their staff earn a wage they can live on.

"We believe in a full and proper wage for a working day. That's why we are committing to introducing a statutory real living wage.

"One of the greatest achievements of the Labour government was the establishment of a national minimum wage, lifting millions out of poverty.

"The Tories opposed it, claiming it would cost millions of jobs, but, united in purpose, we won the argument. Under the next Labour government, everyone will earn enough to live on and we will write a real living wage into law."