You are Here: Home » News » Horses join in fun of carol service 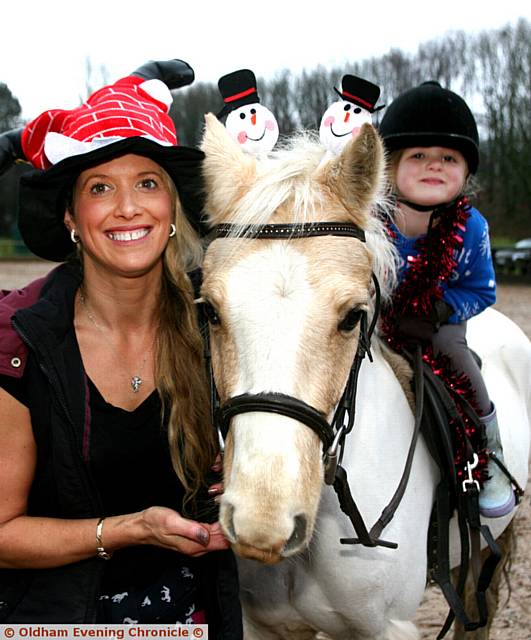 CAROLINE Platt, with her daughter, Savannah Platt, aged four, with her horse, Dan

HORSE RIDERS saddled up for sounds of the season on Saturday.

Around 100 people on horse back and on foot took part in the Horseman's Christmas Carol Service at Friezland Arena in Greenfield.

Animal lovers, many in festive fancy dress, also brought along dogs to be blessed during the service which was led by Saddleworth's new team rector, Rev Sharon Jones and hosted by Failsworth's Olympic silver medal high jumper, Dorothy Shirley-Emerson.

Associate member David McNeeney, who represented Greenfield and Grasscroft Resident Association in the group along with his wife, Kathleen, said: "It was a brilliant service and luckily the rain stopped once it was under way.

"It's a great community event which is very well supported and we're very grateful to everyone who is a part of it."

Oldham Music Centre's woodwind section provided the musical accompaniment and the choir from Christ Church, in Greenfield, helped to keep everyone on song. Afterwards it was time to mingle and enjoy mulled wine and mince pies.