You are Here: Home » News » Trophy in honour of tragic football teen 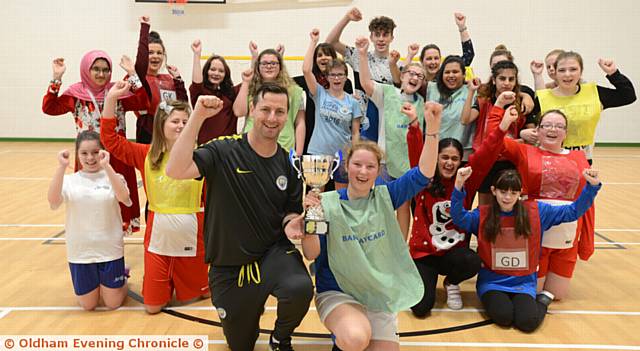 MANCHESTER City have donated a trophy to a Failsworth school in memory of a keen 14-year-old footballer.

The commemorative cup was handed over to the girls' football team at New Bridge School after they lost one of their players. Faye McMillan died suddenly aged 14, leaving the school community shocked.

The girls' teams at New Bridge School, the Learning Centre and Hollinwood Academy played a special tournament in her memory on Roman Road playing fields.

Faye, who had a learning disability, was part of the close-knit team of young teenage girls who play in City's "One City" disability league.

The popular Year 10 pupil had played alongside the team at Manchester City only the week before she died in September.

The team received a visit from the disability football co-ordinator for Manchester City in the Community Foundation, Paul Kelly.

The team was also given an exciting opportunity to meet and have photographs with the Manchester City Women's team who brought along the trophies they have won this season.

A New Bridge School spokeswoman said: "Manchester City do an awful lot to support our children so we want to say thank you to them."

Executive principal Graham Quinn said via the school blog: "I would like to send my condolences to Faye's family.

"Faye loved school." He added: "She belonged with us and I know for certain that she loved her classmates and the staff who supported her.

"She also taught us so much. She will be dearly missed at New Bridge."