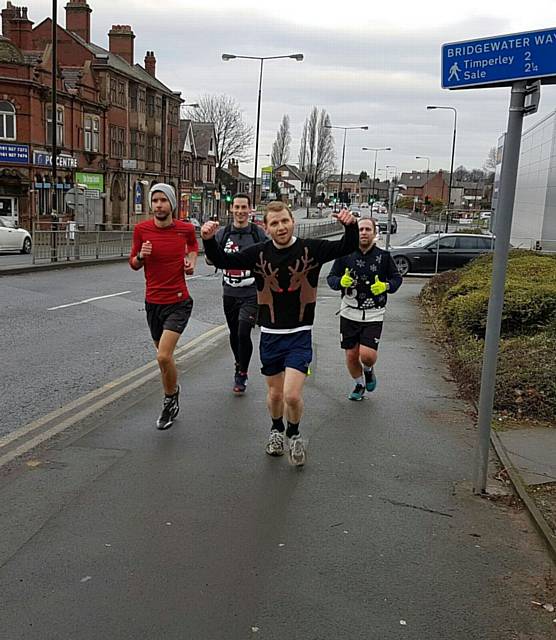 A DAD-TO-BE has "smashed" his fundraising target after completing five marathon runs before the arrival of his first child.

The novice runner almost doubled his target with the help of kind-hearted supporters, raising a huge £1,978.07 to help children with life-threatening illnesses.

Family and friends ran sections of the marathons alongside Gareth, who donned a new Christmas jumper for each run, in aid of When You Wish Upon a Star.

Gareth said: "The challenge was completed at lunchtime on New Year's Eve. Thanks to everyone who ran with me, sponsored me and supported me along the way - it helped so much.

"Also thanks to Lisa for not minding losing me every Saturday while she was eight months pregnant.

"It is an amazing amount raised for charity - we absolutely smashed our target.

"Happy new year to everyone."

Credit analyst Gareth decided to take on the ambitious task ahead of his baby's birth this month.

Every year, he notoriously wears his Christmas jumpers from December 1 through until the New Year, drawing on his large collection.

Ahead of the first race, Gareth's wife Lisa Pattenden (32) bought him a new reindeer jumper complete with a "big bobbly nose" to say good luck.

The marathons were completed every Saturday morning throughout December, including Christmas Eve and New Year's Eve.

Gareth completed his first marathon in three hours and 44 minutes.

While most routes were undertaken in Oldham, Rochdale and south Manchester, he ventured as far as Wigan to catch Wigan Athletic vs Ipswich Town on December 17.

He said: "Unfortunately Wigan didn't manage to earn a celebratory three points (Ipswich won 3-2) but I did have two pies upon arrival at the DW Stadium."

Celebratory drinks and lunch were held at the Belmore Hotel, Sale, at the end of Gareth's fifth marathon, where he was joined by friends and family.