You are Here: Home » News » Simon leads the way at Rushcart

Simon leads the way at Rushcart 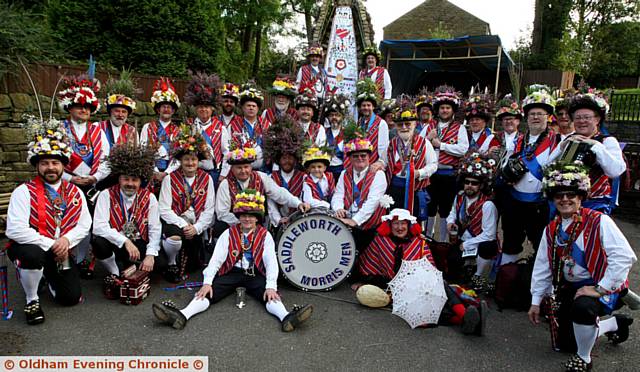 After taking part in the first Rushcart in 1975 at the age of 5, it was finally his turn as Jockey, riding on top of the 13ft-high cart as it is pulled around the Saddleworth villages.

Tradition dictates that the Morris man with the longest continuous service without already riding the cart, takes his turn as Jockey.

Despite dancing in the first 12 Rushcarts, Simon, a father-of-three from Withernsea in East Yorkshire, was forced to take a break from the side when he relocated to Cumbria, only to return in 2010 and take his place with the team.

Simon, a founder member of Oldham radio station Oldham FM which subsequently won the Oldham licence to become 96.2 The Revolution, said: "I always came to the Rushcart as a spectator during my 'wilderness years' and I always vowed I'd return as a member of the team.

"Watching the Rushcart event and not being able to take part in it is heart-wrenching.

"Evenutally, I took the plunge and decided enough was enough, I was returning and this time it's for good.

"I've been looking forward to the day I'd be Jockey and I've waited 42 years for it, so I'm going to enjoy every moment."

A love of Morris dancing runs in the family as Simon's son Joel, who celebrated his ninth birthday on Friday, has already got the bug.

The youngster has his Saddleworth Morris Men kit and turns out with the side regularly.

Joel said: "I am very happy that my dad is Jockey.

"He has been very excited about going on the top of the Rushcart.

"I'd like to do it when I'm older and I take part in the processions with the Morris Men now."

Crowds lined the streets in each village to welcome the 43rd Rushcart, which is made of bundles of rushes piled high, and watch the Morris men dance throughout the day.

The cart faced a difficult year after the Morris men noticed an alarming crack in one of the wheels.

The wheels had to be removed and taken to master wheelwright Phil Gregson in Southport for assessment and repair, spending three weeks in a drying kiln before being repaired.

Jayne Delamere (45), who travelled from Blackpool to watch the festivities with her partner Jack Johnstone, said: "One of our friends used to live in Saddleworth and always praised the Rushcart so we decided to stop by and see what the fuss was about.

"It really is unlike anything I've ever seen before and the dancing is quite impressive."

The two-ton cart was pulled around Saddleworth by Morris men from across the country before a special Rushcart service at St Chad's Church on Sunday.

Morris dancing continued yesterday alongside with the traditional wrestling and gurning competitions and guess the number of Rushes in the bundle.

Saddleworth Morris Men will be recruiting for new members later this year and will host an open practice (taster session) on Thursday, September 21, at the Church Inn Uppermill, from 8.30pm.