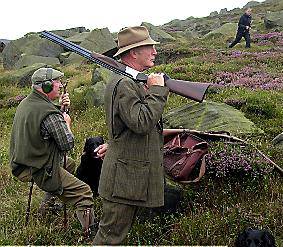 SABOTAGE . . . shooters look on as members of the NWHSA attempt to stop the grouse hunt

ANTI-hunt activists sabotaged a grouse shoot on Saddleworth Moors and warned hunters they would be back to put a stop to any future activity.

Activists from the North West Hunt Saboteurs Association stood next to shooters to stop them firing at grouse and their actions prevented the hunters from killing any birds.

Rules drawn up by the British Association of Shooting and Conservation state that shooters should stop firing and put down their guns if non-shooters approach them.

The activists put a stop to the shoot which had been organised by Greenfield Shooting Club, on Saturday, August 30.

They also put a stop to a grouse shoot on Meltham Moor, which resulted in the police being called, on the same day.

The official grouse shooting season runs from August to December and usually sees the death of around half a million birds.

Paul Timpson, of the NWHS said: “We seek to bring an end to all bloodsports, therefore shooting has always been included in our ongoing campaign of direct action.

“We will find and effectively shutdown as many shoots as we can throughout the season.

“We have a number of contacts across our area who let us know when a shoot will be taking place and we will definitely act on any information given to us.

“A shoot can be quickly stopped using non-violent direct action tactics and we will be out in all the usual areas to do exactly that.

“To listen to the shooting fraternity you’d think the campaign against shooting was a new thing but in reality it has always been part of a wider push for the recognition that it just isn’t right to kill living things for sport.” The HSA played a big part in bringing about a ban on hunting with hounds and are now campaigning for the law to put a stop to bird shooting, which is not illegal.

Paul added: “Grouse shooting is especially cruel because the birds are bought and fattened up before being let out on to the fields where they are shot. Other animals, such as stoats and weasels, are also killed to make sure that they don’t interfere with the grouse.

The Greenfield Shooting Club could not be contacted.