You are Here: Home » News » Can you hear the Thunder?

Can you hear the Thunder? 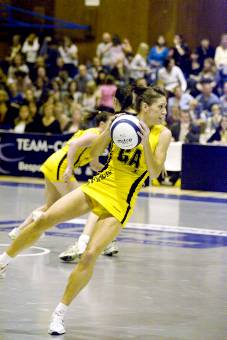 FOURTEEN games into the season and Oldham Athletic are already battling for a promotion play-off spot.

But the season has only just started for another bunch of Oldham sporting stars who are hoping to take their league by storm. Reporter Karen Doherty went along to their first match to find out more.

If your image of the sport is a girls’ game without the excitement and glamour of football, basketball or rugby — then think again.

The atmosphere at Castle Leisure Centre, Bury, was electric as Northern Thunder launched the 2008/9 season of netball’s equivalent of the football Premier League — with Oldham grabbing its share of the limelight live on Sky Sports.

The North-West outfit is coached by the borough’s respected netball stalwart Mike Greenwood, director of coaching for Lancashire, former England under 19s coach, and coach of Oldham: the North-West’s only premier league division one team.

Captain Karen Greig, vice captain Kerry Almond, Helen Browne and Michelle Carroll all live in Oldham while ten of the 15-strong squad have played for Oldham.

They went into the first league match of the season last Thursday as underdogs: pundit and ex-England player Tracey Neville (sister of footballers Gary and Phil) predicted a thrashing by star-studded Team Northumbria. In the end they were beaten 49-51 in a thriller which kept the 500-strong, sell-out crowd on the edge of their seats.

There was a party atmosphere as fans ratcheted up the volume, youngsters danced to the music between quarters and mascots signed autographs. Thousands more watched on TV.

They couldn’t have hoped for a more exciting game and Mike said: “It was party time. The atmosphere was great, the noise was brilliant — it is just what you want from a sporting occasion.

“It is what the spectators want to see and the last quarter was nail biting.”

If the popularity of netball is news to you then it is worth knowing that more than one million girls and women play it in the UK and 20 million globally.

Matches at the Commonwealth Games in Manchester sold out and Superleague sponsors The Co-operative are campaigning for it to become an Olympic sport.

Skilful and fast, Sky Sports realised what all the fuss is about when it started covering the Superleague in November, 2006. Northern Thunder finished bottom last season with only one win but Mike’s son, also called Mike, and Debbie Hallas, who own Oldham-based company Netball UK, have now taken over the franchise.

They have invested substantial money and built links with companies and the county associations. The team have also moved their home games to Castle; Bury and surrounding areas such as Oldham are a netball heartland.

Mike has rejoined as coach of the team which he took to the then Supercup final a few seasons ago and admits that Thunder does not have the Australian stars or current England players of other teams.

Like many football managers, he is putting his faith in the young players who pushed Northumbria all the way.

“Because of where we were last year we do not get the girls who want to come to Northern Thunder. We are relying on local girls,” explained Mike.

“We have got some very young players in the squad, we have got a great set up and we have just got to wait for the players to come through. There is no quick fix.”

On Saturday Northern Thunder lost again, this time 78-54 to Team Bath, a side crammed with England players.

Their next home game is at 4pm on Saturday against Brunel Hurricanes at the Castle Leisure Centre, Bury.