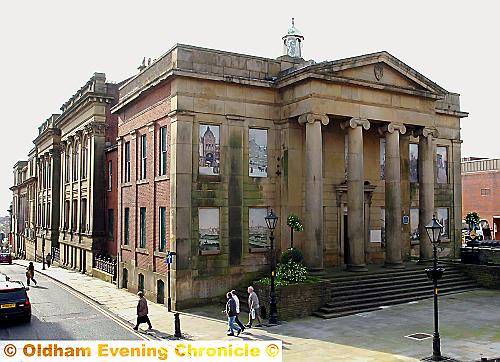 A so-called “at-risk list” was drawn up by the Victorian Society after a nationwide appeal to find the best and most threatened Victorian and Edwardian buildings.

Nominations flooded in from conservationists, campaigners and members of the public.

The society says the Yorkshire Street structure is deteriorating by the day and in desperate need of a saviour.

The building has been boarded up for 15 years, concealing an interior riddled with wet and dry rot, has a roof at risk of collapse and dangerous floors.

And all that in a place with an impressive history which includes Winston Churchill standing on its steps when he was elected MP in 1900. Most of the venues on the list have suffered years of neglect which threaten their future, and Oldham’s 168-year-old Grade-II listed town hall is no exception.

The Evening Chronicle was given access to it 12 months ago, only to find pigeons roosting in the ballroom.

Oldham Council’s chief executive Charlie Parker said doing nothing was not an option, and a £14,000 structural survey was sanctioned among plans to save the building which has decayed to the point it is a potential health and safety hazard.

Oldham Council leader Howard Sykes said: “I’m as horrified as every Oldhamer that an iconic building which should be a source of civic pride has descended into this condition.

”Oldham takes its heritage extremely seriously and we are leaving no stone unturned in our search to find a new purpose and investment for the facility. There is, however, no quick-fix. Reviving the venue will cost millions of pounds and prioritising that funding in the current economic climate is clearly prohibitive.

“We have already been in touch with officials from the Victorian Society and invited them to visit Oldham and see the problem for themselves. We welcome any expertise and ideas they may offer that can set us on the path towards finding a solution.”