You are Here: Home » News » Shedding light on faiths 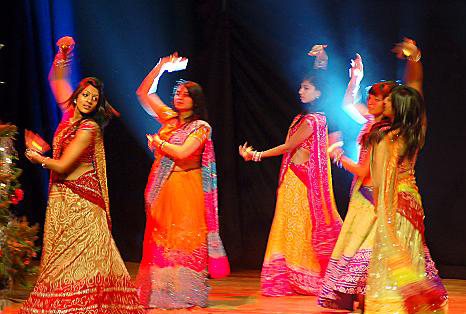 The Lee Street Temple Dancers at the Festival of Light.

A record 800 people brought light into their lives at the annual Inter Faith Forum festival at the Queen Elizabeth Hall.

Since 2003, the Festival of Light has celebrated how light plays important parts in faiths followed by Oldham people.

The stories of Christmas, the Indian Diwali, Muslim Eid and Jewish Hannukah were told and young people representing the different faiths explained why the festivals mattered to them.

The festival opened and closed with two specially chosen Christmas songs from the Choir of St Chad’s School, Uppermill, and there was also song, music and dance reflecting the different traditions.

Violinist Faz Shah of Oldham Sixth Form College performed the theme from “Schindler’s List’ as images of Auschwitz taken by other young Oldhamers flashed up on a huge screen.

Sarah Yasin sang nasheeds (Islamic songs). For the first time at the festival, a group of young people from the Shree Swami Narayan Hindu temple on Lee Street performed a “lazium”, which combines music and dance.

Oldham Police Chief Supt Caroline Ball said: “It was a thoroughly enjoyable evening where we were all able to share each other‘s faiths and life experiences. A celebration of the richness of Oldham".

Howard Sutcliffe, chairman of the Interfaith Forum, added: “This was a very well-attended and happy occasion which put young people to the fore for our inspiration.”