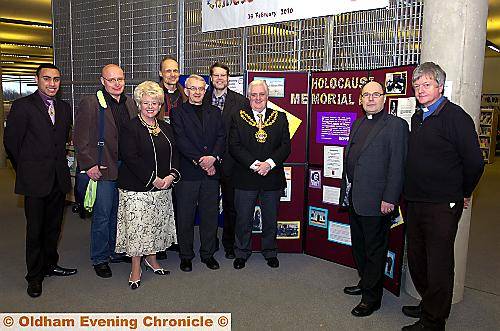 OLDHAMERS of all faiths and communities came together to reflect on the atrocities of the Holocaust.

Events in the borough yesterday marked Holocaust Memorial Day on the 65th anniversary of the liberation of Auschwitz-Birkenau death camp.

A special service took place in the Performance Suite of Gallery Oldham, led by the Mayor, Councillor Jim McArdle.

Organised by Oldham Council, The Interfaith Forum and Oldham Race Equality Partnership, it featured young people and a variety of songs, readings and speeches.

It included a group of Oldham sixth-formers who have visited Auschwitz, the choir from St Chad’s Primary School in Uppermill, Rabbi Daniel Walker, from Manchester, and Rev Howard Sutcliffe, from the Interfaith Forum

Royton, Shaw and Crompton District Partnership also held special ceremonies in both town centres with representatives laying wreaths at both war memorials to remember all those who died during the Holocaust, and in all acts of genocide since.

Councillor Rod Blyth, cabinet member for people and communities, said: “Holocaust Memorial Day is vitally important so that the horrendous events of World War Two are not forgotten.

“There have also been terrible genocides since the Holocaust, including Kosovo and Rwanda.

“Both internationally and on a local scale it is important that we can continue to extend the hand of friendship across diverse cultures and religions and work towards a harmonious future.”