You are Here: Home » News » Friends raise a mountain of cash

Friends raise a mountain of cash 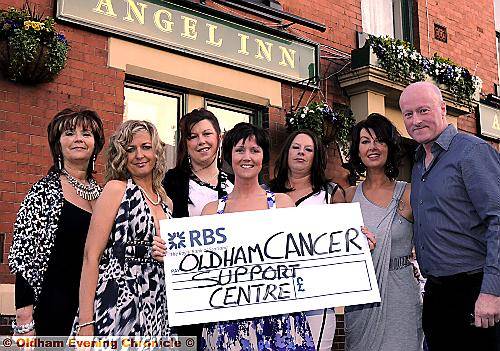 MONEY raised for charity from a mountain climb was boosted by a pub fundraiser to a whopping £6,030.

It took the Shaw mum, who battled breast cancer and osteoporosis, nine hours to reach the summit of the 4,400ft Scottish mountain.

She was supported by trainee nurse Diane Bridgwater (37), trainee teaching assistant Sara Wrigley (37), beautician Andrea Derbyshire (38), teacher Nicola Latham (38) and accountant Rachael McGhee (32), all from Shaw. Fiona, of Scowcroft Lane, was diagnosed with breast cancer in 2008, and underwent two operations, four months of chemotherapy and more than 20 sessions of radiotherapy, losing her hair, eyelashes and eyebrows.

But she is now in remission. A cheque presentation took place at Heyside’s Angel Inn, Shaw Road, on Saturday, with the pub also holding a fundraising evening to boost the final total to £6,030. It involved a raffle and auction, with star prizes including Manchester City and Oldham Athletic signed shirts.