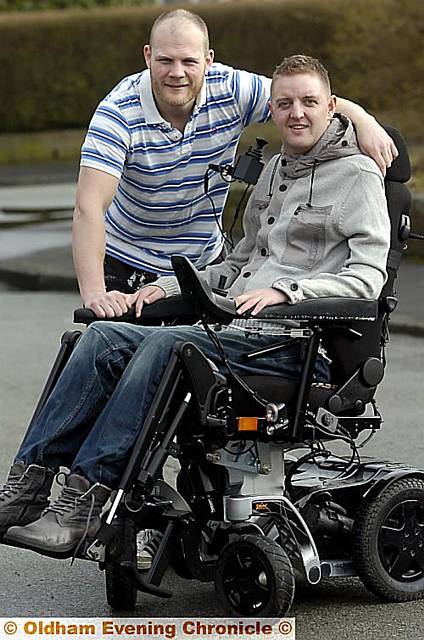 GUTSY Andy Walker has battled to live life to the full since he was paralysed from the neck down in a freak accident five years ago.

The Shaw man’s amazing spirit and determination to take whatever life throws at him on the chin, has seen the former rugby player scale England’s third-highest mountain, Helvellyn, in a wheelchair.

And his attitude has now landed him an acting role in TV soap Emmerdale.

His ITV debut is on Friday, when he is drafted in to show Jackson Walsh (Marc Silcock) that he has a life to live.

Jackson was paralysed in the soap when his van was hit by a train, and Andy (33) who plays Steve Kelly, said: “I play the same role in the programme as I do in life, showing that disability doesn’t necessarily have to be a negative thing.

“Life goes on with a disability, and in some ways it can be better.

“I will explain to Jackson that he can still go abroad on holiday, I will take him to the football, and meet him in the pub.”

Andy is so far scheduled to appear in five episodes, and he explained: “Getting a part in Emmerdale is part of me going forward in my life.”

He puts his screen success down to help from long-time friend, Oldham’s Kelvin Fletcher, who plays Andy Sugden in Emmerdale and gave his some acting lessons.

Always on the look-out for opportunities to improve the lives of others, Andy will not be at home watching his debut in the soap. Instead he will be at Shaw Cricket Club, running a race night, with a big pot of curry donated by Shaw restaurant, Indigo, to raise money for two charities.

Urging people to join him, he hopes to raise £1,000, and laughed: “People can take home what they win, and what they lose goes to charity — I am hoping plenty of people will lose.”

Children are welcome, and the event starts at 7pm.

The money raised will be split between the Back-Up Trust, which helps people paralysed by spinal cord injury, and organised Andy’s Helvellyn challenge, and the second is Vitality, which supports and increases life expectancy for people with spinal-cord injuries in India.

He experienced first hand the basic care offered there after he dived into the sea on a holiday in Goa in 2006.

He broke his neck when he hit his head on the sand, and survived only because he was spotted by two men who pulled him to safety.

Basic first aid facilities meant he was taken to hospital on a makeshift stretcher, with cola bottles strapped together and fixed to his head with masking tape to provide support.

An hour in a rickety, disused fire engine, carried Andy on a long, bumpy journey to a deprived hospital where cows wandered through the wards.

The odds for survival were severely tipped against him, but he was eventually moved to a specialist hospital for spinal injuries in Delhi, where he underwent a major operation to realign his spine.

He spent a further eight months at Sheffield Northern Hospital after he was flown back to England, and although he can now only move his neck and head, with little chance of any improvement, he has an incredible zest for life.

He maintains: “I had an amazing 28 years before the accident. Yes, it’s a new way of life, but there’s no question I’m lucky to be alive.”