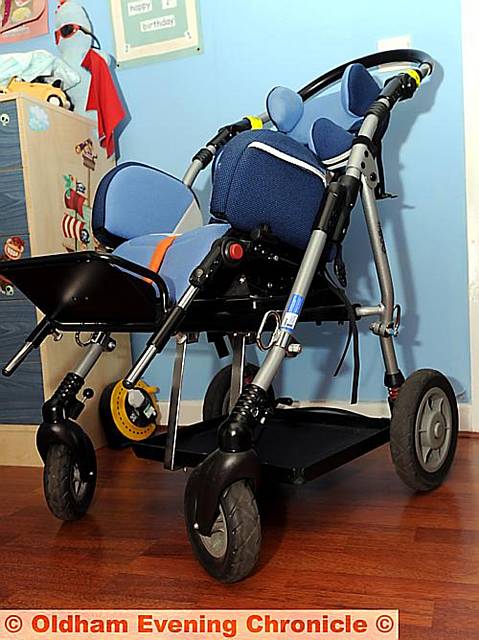 Aaron's buggy — now too small to use

A THREE-YEAR-OLD boy who suffers from a rare muscle condition has been left housebound since last November because of an NHS blunder over a replacement wheelchair.

Aaron Ryan, from Charleston Street, Hathershaw, was born at the Royal Oldham Hospital with Myotubular Myopathy.

The condition means he requires a specialised buggy for transport which can accommodate a ventilator, battery pack and emergency equipment.

On August 3 last year, his community physiotherapist referred him to wheelchair services, which NHS Tameside and Glossop run for Oldham residents, for a new chair as he had outgrown his current buggy.

On November 15, the service manager reassured parents Paula and Peter Ryan that the buggy would be ready in six weeks.

But when his parents checked six weeks later, they were told it had not been ordered and they were advised to call the following week.

Mrs Ryan (36), from Charleston Street, Hathershaw, said she rang them on Tuesday of last week as Aaron had spent six weeks in hospital over the Christmas period.

She said: “I was told the chair had been ordered but they didn’t know how long it would take for it to arrive.

“They suggested I phone every week so I rang on Monday and was told the chair hadn’t actually been ordered.

“They told me they were waiting for one of the directors to sign the order form and he was on annual leave last week. Where was he the 12 weeks before that?”

Mrs Ryan said because of chest surgery, Aaron needs the correct support and posture when he is taken out.

But the lack of suitable wheelchair means Aaron has had to stay at home which Mrs Ryan said has affected his social development.

She said: “I am having to cancel appointments as I have no way of transporting him.

“He has just spent six weeks over the Christmas period in hospital and now he is having to spend all his time confined to our house.

“My son maybe severely disabled but surely he has the right to lead a normal life such as visiting family and going out to the shops.

“But he is now being denied this by wheelchair services failings.”

She added: “I feel let down by the service, we’re having to fight for every little thing.

“I keep getting told they are short staffed or on annual leave or on sick leave, they don’t seem to be open with me.”

After the Oldham Evening Chronicle contacted NHS Tameside and Glossop yesterday, a spokesman apologised for the delay and said a replacement buggy should be with the family today and a new wheelchair by early next week. He said: “Unfortunately an administrative error was made in processing the application at the end of last year.

“We are sincerely sorry for the distress this has caused, and have taken steps to ensure this should not happen again.

“We hope Aaron is happy with his new chair and apologise once more to him and his family for this regrettable error.”