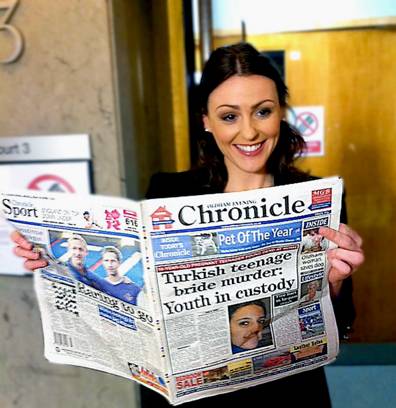 The six-part prime-time police drama features the personal and professional lives of DC Rachel Bailey, played by former Oldham Theatre Workshop student and Coronation Street star, and DC Janet Scott, (Lesley Sharp), as they hunt down and investigate killers and their motives for murder.

And the Chronicle stepped in to produce a specially mocked-up edition of the newspaper to be used in the series.

Film crews have been out and about using Oldham as a backdrop for the latest outing by the Red Production Company.

Last month, May’s chip shop and cafe in Beal Lane, Shaw, was filmed for a scene in the series, with owner Gillian May and three of her family filmed as extras. The series will air on ITV later this year.