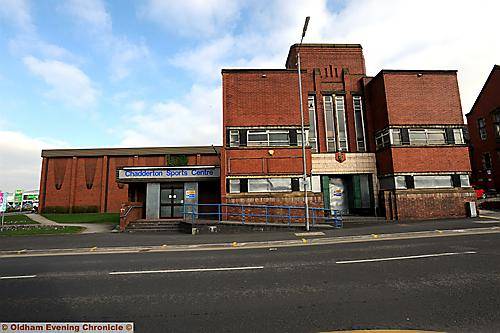 END of the line . . . Chadderton Baths and Sports Centre is set to be demolished

THE death knell has been sounded for Chadderton’s art-deco baths.
A planning application has been submitted to demolish the former baths and adjoining sports centre, which were replaced by Chadderton Wellbeing Centre in January, 2010.

It comes as Chadderton Historical Society failed to get the baths, which are in Chadderton conservation area, listed by English heritage.

The pool — where four-times Olympic swimming champion Henry Taylor was an attendant — closed in 2006 when cracks were found in the roof.

Oldham Council estimated that a complete environmental clean-up would cost £150,000 and that demolition was the likely option.

But Chadderton councillor Len Quinn said that was the price of removing asbestos from the whole of the building, not just that which had been disturbed and was dangerous.

He has asked for a breakdown of the costs and accused the council of using the figure as an excuse to demolish.

“They are moving very quickly to just knock it down, which is quite clearly what their aims and objectives are. I still haven’t received the full details about the level of the asbestos,” said Councillor Quinn.

“There needs to be more consultation with local councillors and the historical society because the past history is just to knock things down overnight.

“The ideal situation would be to find a modern use that saves most of the historical features of the building.”

English Heritage said that it could not list the baths because they were not of national importance.

It is also considering an application by the historical society to list the vacant Carnegie library and Edwardian police station in Chadderton.

Historical society chairman Michael Johnson, who wants the distinctive entrance to the baths preserved, said: “I think all the Chadderton councillors are on our side.

“It would be an absolute waste of an asset to demolish the sports hall. Despite the modern facilities in the wellbeing centre, there is no sports hall there.”

Councillor Mike Buckley, Oldham’s heritage champion, is unhappy that the baths are to be demolished.

He added: “It is an interesting building, it’s got a lot of history attached to it and some nice features which I hope we can find other uses for.

“The big mistake we have been making for years is to let our historic buildings become vacant before a new use has been found for them.

“When you do that a building deteriorates very quickly and is open to theft and vandalism.”