You are Here: Home » News » Barry to broadcast to the nation

Barry to broadcast to the nation 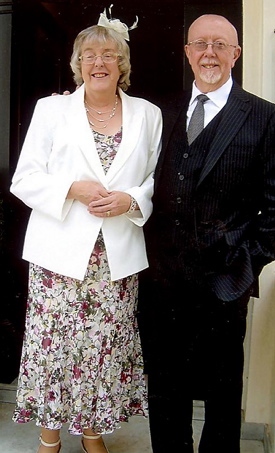 ROYAL appointment . . . Barry and Sue Haslam ready to take tea with the Queen

THE words of an Oldham campaigner who has dedicated much of his life to fighting for people addicted to prescription drugs, will be broadcast across the nation next month.

Radio 4 presenter John Waite came to Oldham to speak to Barry Haslam and some of the people addicted to tranquillisers and prescription drugs who seek help from his support group, Tranx.

They were interviewed for a half-hour lunchtime “Face the Facts” show, due to go out on August 4.

The programme is an investigative series looking at consumer and social stories from across the UK.

It will be the second time Waite has featured the issue on his show, and told Barry of his surprise at the lack of progress made over the 12 years since they last spoke.

“I told him I don’t think we have made any steps forward,” said Barry.

“I don’t think the Department of Health is prepared to listen on this issue. It still describes people addicted to prescription drugs as misusers and that is so wrong.

“This has gone on for such a long time, and we still have guidelines which say these drugs should only be prescribed for two to four weeks. Those guidelines should be made mandatory for the bulk of prescribing.”

Barry added: “The programme will highlight the problem of repeat prescribing, the fact there are no services to help people come off them, and about holding the Department of Health and doctors accountable.

“We talked about the fact that Oldham is unique in that it has the only NHS-funded benzodiazepine withdrawal service — ADS (Addiction and Dependency Solutions.

“And also about Tranx, which has been going for 22 years to support people addicted to prescription drugs.”

During his visit to Oldham, Waite also spoke to staff from ADS about their work to support people struggling to withdraw from prescription drugs.

“The programme is about people’s experiences and what needs to be done about the situation by the Department of Health,” said Barry.

“There are no treatment services for the vast majority of people across the country, and he was interested that people have come to Tranx for support from far afield, from places like Staffordshire, Blackburn and Huddersfield,” he added.

Barry and his wife, Sue, travelled to Buckingham Palace as guests at a Royal garden party last Wednesday.

It is the second time the couple, from Uppermill, have received an invitation to take tea with the monarch.

They thought they had missed the boat when they had to turn down an invitation seven years ago for personal reasons.

And they were delighted to get a second chance, and this time nothing was going to stand in their way.

Barry’s now conquered long-term addiction to prescribed benzodiazepines left him with a legacy of fatigue.

So they set aside three days for the trip, which meant he had plenty of time to rest and enjoy the occasion in full.

Barry said: “The invitation must have been for my “work” on the benzo campaigning.

“There were at least 1,000 people there from a big cross-section of the community, and we had a wonderful time.

“The weather was excellent, it went a bit cloudy which was good because it was really warm, a band was playing and it was an ideal setting.

“It was thoroughly enjoyable.”