You are Here: Home » News » We will not let the thugs win

We will not let the thugs win 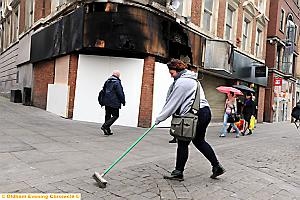 A HUGE clean-up operation was under way in Manchester today as defiant city leaders said they wouldn’t be defeated by a shocking night of rioting.

Police faced “extraordinary levels of violence” in the City centre and Salford from hundreds of thugs looting shops and setting them ablaze as the London riots spread across the country. Officers made 113 arrests.

But residents and business owners refused to be beaten as they set about cleaning up the debris this morning to get the city centre back on its feet — with Oldhamers joining in to help.

Carly Stacey (28), from Springhead, who works for a banking group on Market Street, Manchester, was armed with brushes.

She said: “Credit to the police and to the council, they have done an amazing job. I wanted to help today because I really love this city and I refuse to see any signs of destruction hanging around.

“I was coming back from Oldham and I saw it all on the news and I could not believe it. The worst thing was when I saw the footage of the person setting fire to the shop that nobody stopped them.”

Do you know any of the rioters and looters? Take a look - click here to see the police gallery of rogues!

Sarah Hughes (18), of Henley Street, Chadderton, said: “These people should all be locked up and I hope the police get them and throw away the key. They don’t deserve to live round here. I think they are doing it for the attention. If they can do it here, they can do it elsewhere.”

Manchester City Councillor Pat Karney said: “People in Manchester are very angry about what has happened in our city centre and it is time for us to stand together and say we will not tolerate this kind of behaviour.

“We have a very clear message for the criminal thugs who tried to destroy our city centre. You will not beat us. You will not win. Manchester is open for business as usual. Our street cleaning crews have been out all night clearing the mess that has been left behind. That work continues today, with the people of Manchester joining us to help out.”

Looters — many wearing masks and hooded tops and some reportedly as young as nine — had thrown firebombs as they marauded through the streets bringing terror from 5pm until calm was restored around 1am.

Police were continuing to patrol the streets today as shocked business owners surveyed the damage.

Assistant manager of American Apparel, Ashley Morgan, said: “I closed at 5.30pm, because it was getting aggressive and it started kicking off a few doors down. I have seven staff and I got them all home. There was about 50 youths outside and there was nothing the police could do.”

A local bank manager who works in Manchester added: “I feel sorry for the businesses. It’s hard enough to make a living as it is. We’ve got to get tough with these people. Just thank God I got all my staff out on the advice of the police. I hope it doesn’t kick off tonight.”

Despite scaremongering posts on social networking sites of trouble across Oldham, the borough remained free from rioting.

But Middleton suffered as copycat rioters took to the streets as a derelict building and a car was set alight.

Babyworld in Market Place, a derelict store currently under renovation, is thought to have been set alight by youths, causing extensive damage to the ground and first floor. Firefighters reporting seeing around 50 youths lurking around the centre, as police cordoned off the main route through Middleton, and also attended a car on fire, a children’s nursery and a skip fire.

Assistant Chief Constable Garry Shewan, of Greater Manchester Police, said: “Criminals have brought shame in particular on the streets of Salford and Manchester. GMP has been faced with extraordinary levels of violence from groups of criminals intent on committing widespread disorder.”

A murder inquiry was under way in Birmingham after three pedestrians were run over and killed after reportedly trying to protect their neighbourhood. A man was arrested and a vehicle recovered, but it’s not known of the deaths were linked to rioting in the area.

DEBBIE Abrahams, MP for Oldham East and Saddleworth, said: “This violence and vandalism is inexcusable criminal behaviour. I’ve been in touch with our local police and they are monitoring the situation very closely. This is a time for calm and common sense. We need to stand together as one community, keeping Oldham safe for all.”