You are Here: Home » News » Wembley date for dancers 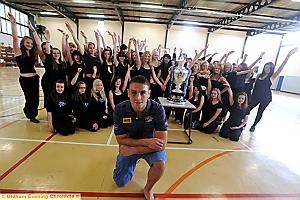 LEEDS Rhino captain Kevin Sinfield joins the army of Oldham dancers ahead of their big fixture.

Girls put on show for 85,000 cup-final crowd
THE hallowed turf of Wembley Stadium beckons for an army of talented dancers from Oldham.

An energetic group of girls from Waterhead Academy and Saddleworth School have notched up 30 hours’ practice to perfect a seven-minute showcase of spectacular dance moves.

They are preparing to dance on to the pitch in front of 85,000 chanting Rugby League fans at the Carnegie Challenge Cup Final on Saturday, August 27.

And a brush with fame was even in store for the troop as Leeds Rhino’s captain Kevin Sinfield stopped by to check on their progress ahead of the big day. His team will clash with Wigan Warriors in the fixture.

“I’ve never done anything like this before, but it’s been fun practising.”

From beginners to experts, the dancers will join up with teens from Hertford and Richmond during the pre-match performance to dazzle with every synchronised step.

Oldham East and Saddleworth MP Debbie Abrahams, who was also there to witness them in action, said: “It is wonderful to see the young people of Oldham getting involved in sport and representing our community at this national event at Wembley.

“They should all be very proud of their achievements.”