You are Here: Home » News » Clean-up prayers are answered! 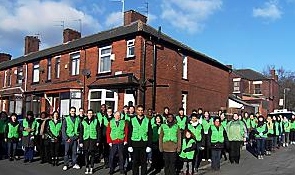 WASTING no time . . . members of the World Mission Society Church of God collected 50 bags of rubbish

PEOPLE power saw 80 volunteers clean up Clarksfield as part of a worldwide campaign to rid streets of rubbish.

Members of the Trafford-based World Mission Society Church of God decided to lend a hand after reading in the Chronicle about reported litter problems in the area.

The mass clean-up comes amid fierce debate between Oldham politicians as to who is responsible for tidying our streets.

But Labour councillors claim the tough financial position the council finds itself in does not allow the luxury of employing staff to clear up after residents — who should keep their own streets clean.

Complaints were raised by Councillor Lynne Thompson who reported Kelverlow, Goss Hall and Ronald and Eric streets as major hotspots.

Councillor Thompson blamed a lack of council resources for the deteriorating problem. Campaigners took matters into their own hands and headed to those streets where they felt their help would be most needed. Around 50 bin bags were packed full of rubbish in three hours. Delighted residents praised the volunteers on the good deed and invited them to “come round more often.”

Others joined in with the clean-up. The volunteers, who pay for their own cleaning tools and transport to get around, have already tidied up areas of Manchester, Bury, London and Newcastle. They are carrying out the environmental campaign to cut pollution and to assist the underprivileged.

Lauren Webb, from the church, said: “When we see a problem area reported in a newspaper, we take it upon ourselves to carry out the mission to clean up that area.”

The clean-up comes at a time when complaints have been made about cuts to Oldham Council’s street-cleaning teams.

He said: “Some constituents expect us to start picking up after them. They think we should start with areas where residents don’t look after their own streets. Do not attack the council for not taking action when you don’t take your own.”

Councillor Jean Stretton said there had been a slight increase in litter in certain hotspots of the borough which tend to be those with dense residential properties for obvious reasons.

There are 2,200 churches in 150 countries around the world, all participating in clean ups where they live.