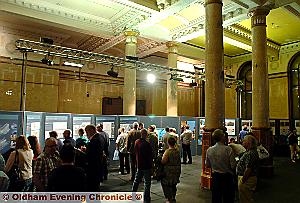 VISITORS flocked to the old town hall to see the plans.

BLOCKBUSTER plans have been revealed to transform Oldham’s old town hall into a cinema-led leisure complex.

An innovative vision for the Grade II-listed building was showcased to the public yesterday inside the landmark building, which which could one day house eight screens, shops, cafes and a restaurant.

Councillor Jim McMahon, leader of Oldham Council, announced the money for the development is in place and hopes the historic structure will become a “catalyst” for the area.

He pledged: “This will happen.”

Councillor McMahon told the Chronicle: “We don’t want a town centre that just looks like any other town centre. This is about Oldham trying to rediscover itself.”

Visitor views
Geoff Gee (75), a former policeman who worked in the old Oldham Borough Police Station - based in the town hall - was impressed by the plans.

The Saddleworth resident said: “Oldham is a town of moaners and groaners. Oldham is a rundown town at the moment, but let’s bring it to light. If this structure goes ahead, I feel it will be great. When you see plans like this and meet people with a go-ahead mentality, it’s exciting.”

“This is probably one of the only ways to develop the building in 2012.”

Steven Ferguson, of Derker, added: “This all looks promising: I really hope it actually happens.”