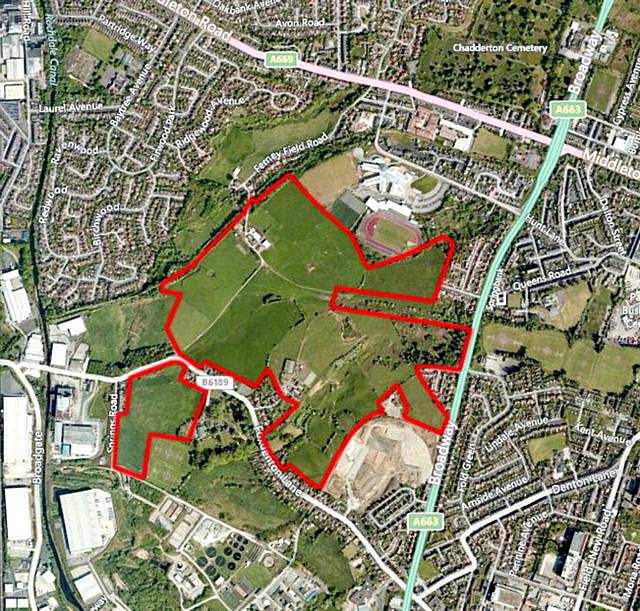 AN aerial view of the potential Foxdenton Employment Area ringed in red. Image by Digital Globe

A MASSIVE business park and up to 380 homes could be created on a huge swathe of green land in Chadderton.

Oldham Council and the private sector have worked on developing proposals for the 74-acre Foxdenton Employment Area that could create more than 4,000 jobs.

The land was once earmarked for Oldham Athletic - or a prison.

The area is predominately “greenfield”: land previously undeveloped or where structures have blended into the landscape over time. Some parts of the huge plot have been used for landfill.

The council’s website says the proposals are for the “only large predominantly greenfield site available within the borough”, in part of the borough’s M60 “Arc of Opportunity”.

Residents who claim they have been “left in the dark” about the proposals are holding a meeting on Monday to discuss the plans.

The project could include:

::1 million sq ft of industrial and business floorspace, although some distribution and storage use may be allowed.

::Up to 380 homes on up to a quarter of the site, to bring in money to kickstart the development

::The reclamation of 27 acres of derelict land.

::The creation of more than 3,332 full-time-equivalent jobs and 1,073 construction jobs.

Foxdenton LLP (Limited Liability Partnership), a joint venture between Grasscroft Property and Seddon Group, has options on a substantial proportion of the site. Oldham Council owns some of the land along Broadway.

No planning application has been submitted but Foxdenton LLP is expected to hold an exhibition about the proposals next month.

Councillor Dave Hibbert, cabinet member for housing, transport and regeneration, said that any development was in the early stages.

He added: “This is privately-owned land. It was farm land for as long as I can remember.

“It was obvious something was going to happen on there. We have said all along it has got to be a high-quality development and very considerate of the potential impact on residents — if it isn’t, I will be at the forefront of any action group against it.”

The residents’ meeting is at Nimble Nook club, Foxdenton Lane on Monday (7pm).


THE land — an area bigger than Daisy Nook Country Park — is a mile from the M60 and two miles from the M62.
Concerns about its future were raised by local campaigners in 2010, when the local planning map noted it was to be designated for light industry, business, warehousing and distribution and housing.

Residents felt there has been a lack of consultation, a complaint dismissed by the planning inspectorate in approving the borough plans.

The land had previously and controversially been selected for development as the new Oldham Athletic site in 2004; in 2010 it was one of 76 potential sites for a new prison.