You are Here: Home » News » Debbie visits a land divided 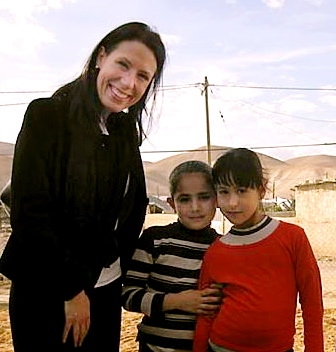 REACHING out . . . Debbie Abrahams makes friends in the West Bank

In November, like many of you I watched the news in horror as violence rained down on ordinary people in Gaza, as well as Israel.

I was struck once again by the timing of the Israeli government’s missile attacks on Gaza just a few months before a general election, as they had in 2008.

The Israelis justified these attacks as a response to Hamas, the ruling party in Gaza, firing missiles into Israeli settlement areas in occupied Palestinian territory.

Although each side claimed the right to defend itself and assert its sovereignty (or in the Palestinian’s case, the right to sovereignty) ordinary people bore the brunt of these attacks — predominantly Palestinians. Children and women, young and old, disabled and sick were all casualties, terrorising and radicalising on both sides.

So when I was invited to Gaza and Israel for a four-day visit after the ceasefire in December, I saw an opportunity to find out for myself what was happening on the ground.

Just because this conflict is happening thousands of miles away doesn’t mean it hasn’t got the potential to affect us here in Oldham.

I have grave concerns about the fragility of peace, not just between Israelis and Palestinians but in the Middle East as a whole, and consequently the world.

Our visit was important to show that the international community is concerned about what is going on and wants to see as well as to hear the testimony of both sides.

Before we set off our group was disappointed to learn that Israel was to prevent us from entering Gaza. Instead our visit would focus on the West Bank. After an overnight flight from London, I arrived at 5.30am on a cold December day in Jerusalem to discover a book on Islam I had put in my suitcase had been confiscated by El Al security. I was not pleased.

My first day began with a briefing by the United Nations office for humanitarian affairs, followed by a whirlwind tour to different settlement sites in the West Bank.

When you hear about these settlements, you imagine a few houses built here and there. But these are developments of towns and villages surrounded by huge concrete walls, in many places over 20ft high. The only way to get in and out of them is through border-style checkpoints and if you’re not an Israeli citizen you need a special permit. As these settlements cut through the heart of the West Bank, carving up Palestinian communities, the Israelis have come up with a novel solution: Palestinian-only underpasses.

Over the next couple of days I saw how the subtleties of control and repression operate.

In Biddu, on land considered within an Israeli settlement area, Palestinian farmers are prevented from tending their land and, with unemployment at over 70 per cent, from making a living. They can only access their land with settler permission - often denied until after harvest time.

In the Jordan valley, UK and EU-funded Palestinian primary schools are under demolition orders as they are said not to have followed “proper” planning regulations by the ever-expanding settler councils.

In Hebron, Palestinians are only allowed to walk on designated footpaths.

We also saw evidence of the unsubtle approaches: Bedouin tribes forcibly moved from areas close to vital water supplies; an 144 per cent increase in violence by Israeli settlers against Palestinians - including children; the Israeli justice system, which operates military law for Palestinian children but not for Israeli children.

In the short time I was there I knew I would get only a snapshot of the issues and how this was affecting people. Yes, there was some anger but most of this came from politicians and officials from both sides of the divide - there is much at stake, after all. Most worrying was the entrenchment, intransigence and frankly, the lack of vision or leadership.

I appreciate the complex and tragic histories of the peoples of Israel and Palestine but this does not excuse or justify the Israeli annexation of the West Bank by illegal settlements and the casual racism that underpins this; or the Palestinians denying Israel’s right to exist or firing of missiles into these settlements.

Most of my hope for the future comes from ordinary people, Palestinian and Israeli.

In spite of the frustration, indignity and injustice faced daily by ordinary Palestinians, most just want a peaceful future with their families - something we can all identify with.

What I witnessed is out of sight from most Israelis; but some who have seen what their governments are doing in their name are doing their best to raise awareness among their fellow countrymen. They need our support.

Before the UN agreed to recognise Palestine as a non-member state, Archbishop Desmond Tutu said: ’Sixty four years is a long time to be denied your own state. It is time for the Palestinians to have the recognition they deserve.’

Palestine winning this recognition does at least seem like progress. We need to do more to ensure the next phase of progress doesn’t take as long.