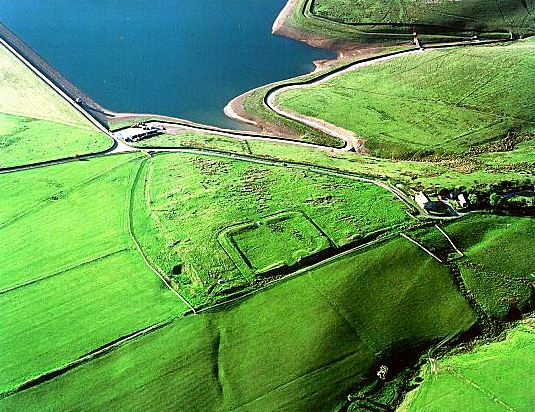 VIEW from above... an aerial photo of the Castleshaw site

CONTROVERSIAL plans to plant trees near an historic site has led to fears ancient Roman ruins will be damaged and lost forever.

A dispute is brewing over the site of Castleshaw’s Roman fort and road after the Forestry Commission released proposals to plant 20 hectares of trees at Bleak Hey Nook Farm near Delph.

The move has been met with fierce opposition from the Friends of Castleshaw Roman Fort and the Greater Manchester Archaeological Advisory Service.

Both groups say the development would mean digging into the Roman Road and changing the character of the valley and site.

The road - the main cross-Pennine highway linking fortresses at Chester and York - is one of the finest remaining Roman roads in Britain, widely believed to be of national historical significance.

Norman Redhead, Heritage Management Director at GMAAS, said: “The Roman road remains may not be the only significant archaeology within the area; it’s just that it is visible.”

He claims further research will reveal the full significance of the site: “Planting trees would compromise our ability to undertake future research, as well as damaging the archaeology of the road itself.”

Peter Holford, of the Friends of Castleshaw Roman Fort, said: “There is also the visual impact — the character of Castleshaw Valley would be altered and the setting for the forts would be adversely affected.

“Many of our members are also concerned that there has been no consideration given to the existing eco-systems and the damage planting would cause.”

A Forestry Commission spokesman said: “We are considering responses in terms of the eligibility of the scheme, potential environmental impact and the provisions of the UK Forestry Standard.”

The spokesman confirmed the sensitive nature f the proposal meant a decision “will not be rushed”.