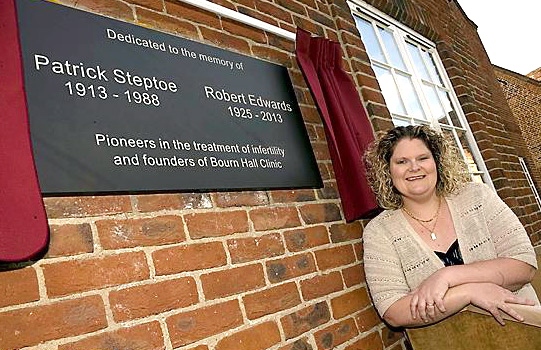 REMEMBERING where it started: Louise Brown unveils a plaque to honour IVF pioneers gynaecologist Patrick Steptoe and reproductive biologist Robert Edwards at Bourn Hall, the clinic they founded in Cambridge.

THE world’s first test–tube baby has paid tribute on her 35th birthday to the fertility pioneers who gave her and millions of others life.
Louise Brown was born at what was then Oldham General Hospital on July 25, 1978, after her parents Lesley and John had been the first parents to successfully undergo in vitro fertilisation (IVF).

Her birth attracted controversy, partly from religious groups, but there are now thought to be more than 5.5 million IVF babies worldwide.

As she prepared to celebrate her birthday with a private family meal Louise - now expecting a second child of her own said: “When I was born they all said it shouldn’t be done and that it was messing with God and nature but obviously, it was meant to be. It has helped millions all around the world.

“I had my own son without IVF, I’m pregnant again, and lots of people I know or have heard of have gone on to have children naturally. It’s just the beginning of life that’s a little bit different - the rest is just the same.”

Louise, whose younger sister Natalie was also the product of IVF, now lives near Bristol. She is married and has a six–year–old son, Cameron.

She unveiled a plaque to honour IVF pioneers gynaecologist Patrick Steptoe and reproductive biologist Robert Edwards at Bourn Hall, the clinic they founded in Cambridge and where the techniques and drugs now used worldwide were first developed.

Their research led to the successful fertilisation of a human egg outside the body and the transfer of the resulting embryo to the womb.

Sir Robert, who was awarded a Nobel Prize in 2010, died aged 87 in April, this year. Steptoe died in 1988 and did not receive the prize, which isn’t awarded posthumously.

“Bob was like a grandad to me and I felt very, very sad to hear of his death. He was so well liked and so many people owe so much to his work.

“It is difficult to say what it is like to be the first test–tube baby, as I have been brought up with it. It’s just always been there — it’s my life,” she added. “I think my mum was fantastic, very brave, but I suppose if you’re told you can’t have children, you’ll do anything.”

Remembering his childhood, he said: “I’m still very proud to be part of that history - but you can let your head go in a spin if you think too much about it.”

Dr Jenny Joy, Sir Robert’s daughter, said that he would like to be remembered as “the father of IVF”.

“When dad first started working on this, years before Louise was born, infertility really wasn’t taken that seriously,” she said. “There was a lot of criticism to overcome and a lot of science to do. He believed that there was nothing more important in the world than having a child.

“There could not be a greater legacy than over five million IVF babies.”


Bourn Hall Clinic treats more than 3,000 couples each year. Medical director Dr Thomas Mathews worked with Steptoe in the early days and said 35 years later, staff still aim to continue his ethos.
“It was a very exciting time in those early days, IVF was very new,” he said.

“All of us, as gynaecologists, had heard about this procedure and it was fascinating to come here and see it being done.

“Patrick was an old-fashioned gynaecologist. He was passionate about his patients and treated them extremely well.