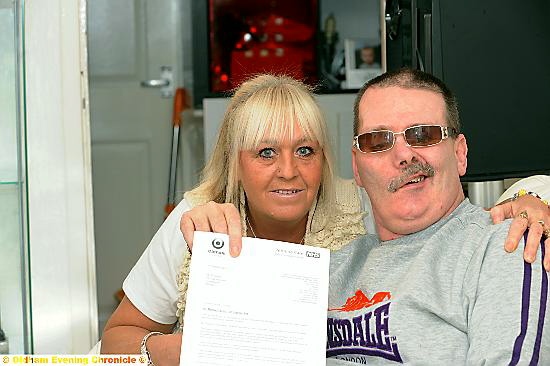 Velma Taylor and her husband Michael

AN Oldham wife who cares full time for her disabled husband has beated the bedroom tax.

Velma Taylor was devastated when she faced having to put her husband Michael (45) in a care home earlier this year. She couldn’t afford losing benefits because of a second bedroom in their home.

Velma and Michael - who suffered a serious brain injury in a car crash 16 years ago - had to move out of the three-bedroom Sholver home they had shared for 26 years due to the rent increase.

But now the 56-year-old carer has been told she won’t be expected to pay extra for their new two-bedroom bungalow in Chadderton.

She said: “I really am over the moon with the result. I fought so hard and for so long against these changes because I thought it wasn’t fair.

“It was so upsetting having to move and still being told that we had to pay money we could never afford on a bedroom we needed.

“My husband has severe brain injuries. It would be impossible for us to sleep in the same room and that is why I have been campaigning against this extra charge.”

She petitioned MPs, health professionals and Oldham Council to help her fight.

“I hope other people struggling with bedroom tax payments see it is possible to overcome the changes and that they shouldn’t give up,” she said.

“Full-time carers should not be punished for looking after family members.”