You are Here: Home » News » £100m Foxdenton scheme gets the big hands-up 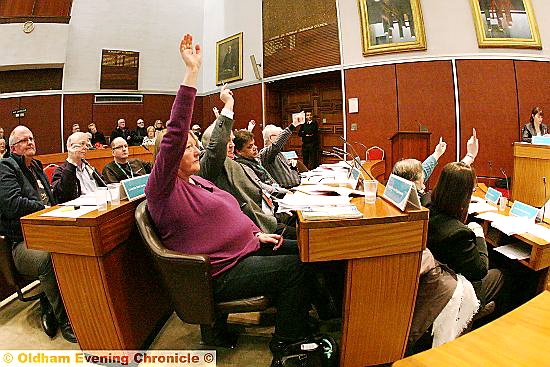 SHOW of hands . . . the development is voted through

Councillors passed a so-called hybrid application in two parts: the first giving full planning permission for a spine road connecting the A663 Broadway and B6189 Foxdenton Lane, vehicle access to the site and demolition of buildings; the second giving outline planning permission for an employment-led, mixed development of offices, warehousing, factory units, homes and a 20-acre “linear park”.

The massive development - to be called Broadway Green - will see largely open land transformed into a 120-acre site with up to 500 new homes and industrial units up to 30 metres high, including a 700,000 sq ft warehouse.

The scheme was overwhelmingly backed by councillors for its potential for jobs and upmarket homes. But critics said other old industrial sites across the borough should be redeveloped rather than building on open space. They also raised fears about future traffic congestion, noise and pollution, pressure on local schools, public footpaths and the future of historic Foxdenton Hall.

Jameson Bridgwater the council’s head of planning said: “Transport has been a key issue and we have taken guidance from all the authorities. We have consulted other organisations on issues such as ecology and drainage. This is a major site for Oldham. There are very few sites that can deliver this kind of opportunity for inward investment for large-scale employment.”

Local residents voiced strong opposition to the plans, including problems with traffic and a lack of local school places. The council received 259 letters of objection when the application was initially submitted last summer; another 47 in response to the revised application.

Last night the proposed T-junction on Broadway was described as “monstrous” by a number of speakers.

Applicant Mike Coulter, of Foxdenton LLP, defended the plans. He said: “I’m an Oldham lad who spent 22 years living in this area. I have family and relatives there. I’m not a faceless London developer going for a quick buck. I want to get Oldham working and this plan builds on the great work by the council in recent years. I understand the concerns of people living close by and we will engage with them”

The Department for Trade has offered a £1.7million grant towards road works for the site, which could create up to 2,000 jobs.

There were gasps from the public when they heard the worst case scenario was for the scheme to continue for 12-15 years. But the plan us for completion in six years.


DISAPPOINTED Eric Parr, a member of the Foxdenton and District Protection Group, said he believed there was scope for a sensible and sensitive development... “but this is not it”.
“I am astonished at the decision and think it is pathetic. The committee has displayed a lack of knowledge and research that has been done before making a decision.”

John Walton of the Ramblers Association, said he was far from happy with the outcome, but expected nothing else: “I am still be to convinced that this development has the financial backing to succeed — especially with the heavy financial impositions already placed on the developments.

Dennis Heil of Foxdenton Lane said: “Foxdenton Lane is not conducive for HGVs or construction site traffic, or even domestic traffic from 500 houses. He also expressed concern for local wildlife.

Michael Lawson, secretary of Chadderton Historical Society, said: “I’m very disappointed, but everybody expected this to go ahead. Traffic pollution is already high and this will make it worse. The linear park is a token gesture.”