You are Here: Home » News » Oldham forever in Kosovan hearts 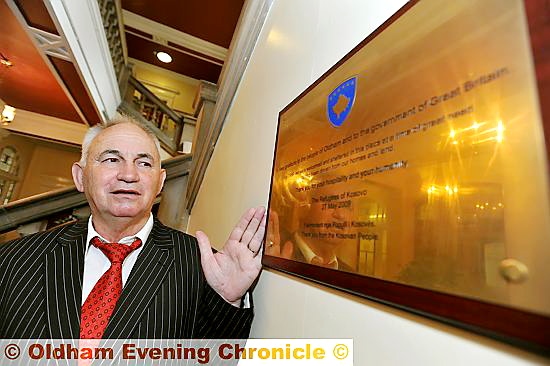 TRIBUTE . . . Osman Caka pays his respects at the plaque at Chadderton Town Hall

A KOSOVAN refugee yesterday kept his annual promise to pay his respects to the generosity of Oldhamers on the anniversary of his arrival.

Osman Caka, who now lives in Clayton, arrived with his family at Chadderton Town Hall on May 27, 1999 - frightened and penniless.

A plaque commemorating the 10th anniversary of Oldham’s welcome to the refugees was unveiled at the town hall on the anniversary in 2009.

Since then, Osman has marked the date by visiting the plaque to pay his respects.

He said: “Every year I go, I never forget. I had a second birth in Oldham, it is my second home and it is very very important that we never forget. Oldham people gave everything to our people. They gave us food, clothes, heart and spirit — and for that I will always be thankful.”