You are Here: Home » News » Street Angel to rescue after hit & run horror 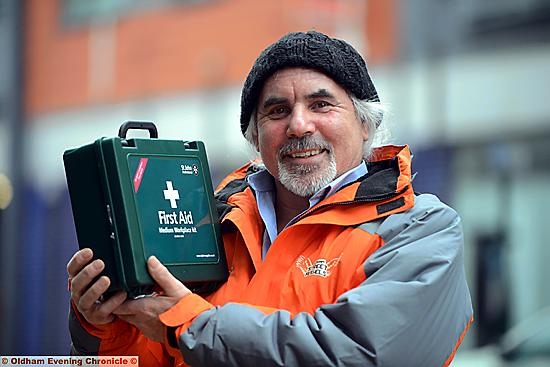 TOUCHED by an angel: Christopher Molden saved the life of a hit-and-run victim

A man knocked down by a taxi and left for dead in Oldham town centre has an angel to thank for saving his life - literally.

The victim was left in the road not breathing and with a broken leg and faced almost certain death until one of Oldham’s Street Angels saved his life.

Father-of-three Christopher Molden (60) was out with the Angels team in the early hours of Sunday morning when he heard a loud bang in Waterloo Street and ran to see what had happened.

Mr Molden, a facility supervisor with Regenda housing, said: “I saw a young lad on the floor when I got there and a taxi just drove off after hitting him. There were girls screaming in the street.”

Father-of-three Chris, who joined the Angels team last May, called on his first-aid training and lifted the man’s head and opened his mouth.

“He took a big breath and regained consciousness,” said Chris. “Had we not been there he probably would have died. I was just pleased I could help him - that’s what we are there for. When we are able to help someone in this way and potentially save their life, it is all worth it.”

Chris and the team stayed with the man until an ambulance arrived.

The Oldham Street Angels are volunteers who give up their weekend nights to patrol the town centre streets to help anyone who needs them.

Reverend Jean Hurlston, co-ordinator and founder of the Oldham Street Angels, said: “I’m so proud of Chris and indeed the whole team on duty that night. They really are all angels.”

Police later arrested a 38-year-old taxi driver on suspicion of failing to stop after an accident.